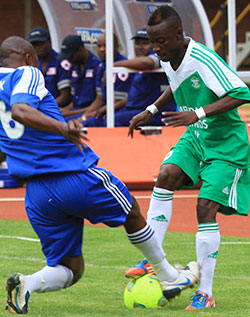 MINNOWS How Mine dumped Harare giants Caps United from the Mbada Diamonds Cup after beating them 4-2 on penalties at the National Sports Stadium on Sunday.
The match had finished 2-2 on regulation time.
The gold miners will now meet Highlanders who kicked out Harare City in the other semi-final at Mandava on Saturday.
Veteran Menard Mupera scored a stunning long range drive on 54 minutes leaving neutrals nodding in acknowledgement of a great piece of work as How Mine went into the lead in a match in which leadership changed hands twice.
It was not an ordinary goal but the kind of stuff we witness at the highest level of the game.
Mupera 33- rejected by the Green Machine at the beginning of the season after he had been invited for trials was happy to score a great goal which also helped his team to a victory over Caps United.
“It’s the greatest feeling ever,” said Mupera. “It’s not a coincidence to score this goal. It’s the type of goals I usually score. I spent the whole week practicing shooting.
“I am so happy it has paid off. We were just saying to ourselves we can’t be beaten three times by the same team and we are excited to reach the final of the Mbada Diamonds Cup.
“It will be a cracker against Highlanders. We have always been underdogs and we will remain underdogs as we go into the final.”
But it was the Harare giants who raced into the lead on 41 minutes with Rahman Kutsanzira inking his name on the score sheet when he got to the end of a free kick by Hardlife Zvirekwi before side footing the ball home.
The home team dominated for much of the first half with Leonard Fiyado and Tawanda Nyamandwe coming close on several occasions and it was not a surprise as they went into the lead through Kutsanzira.
However, Warren Dube equalized for How Mine on 51 minutes beating goalkeeper Tafadzwa Dube with a low shot.
As the gold miners dominated, making forays into the Caps United goal in the second half they were rewarded on 55 minutes with Mupera letting fly a 40 meter drive that beat Dube as it found its way into the net.
But as How Mine appeared to be growing in confidence- their lead proved temporary as Caps United equalized on 60 minutes with a Tawanda Nyamandwe headed goal after Khumbulani Banda lost possession in the penalty area.Advertisement