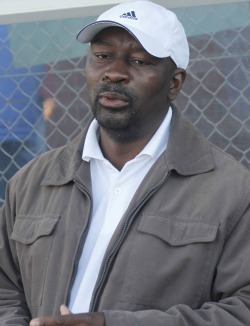 HOW Mine coach Philani Ncube was upbeat this week as his charges prepared for the trip to Harare hoping to complete a double over defending champions Dynamos in Sunday’s quarter finals of the Mbada Diamonds Cup at Rufaro.
The gold miners handed Dynamos a shock 1-0 defeat in a league encounter – one of three defeats in the campaign so far – and as the two teams meet in the last eight of the lucrative tournament, Ncube is confident of another upset which will see his side reach the semi-finals.
However, How Mine go into the match on the back of a 3-0 defeat to Black Rhinos in league match which left them on eighth position on the league table with 32 points.
But Ncube said on Wednesday the defeat to Black Rhinos is a minor set-back and expressed confidence they will bounce back.
He said although he had respect for Dynamos as defending champions, he was looking forward to a victory at Rufaro.
“Of course the defeat to Black Rhinos was a set-back but this is a different ball game altogether; it’s a cup game and anything can happen. We have respect for Dynamos as the defending champions but we are going to Rufaro to compete,” said Ncube.
Dynamos will be seeking redemption in the Mbada Diamonds Cup after squandering an opportunity to extend their lead at the top of the premiership after stuttering to a 0-0 draw against Monomotapa in a league match at Rufaro on Sunday.
Kalisto Pasuwa’s men had also suffered a 4-2 defeat to Hwange in a league match the previous week.
But assistant coach Richard Chihoro says the draw against Monomotapa shows there is improvement and were looking to boot out How Mine from the prestigious cup.
Chihoro expressed confidence the champions would bounce back and progress to the semi- finals of the richest knock out tournament in the country.
“We are motivated to defend this cup and we should beat How Mine,” he said.
“We suffered a defeat to Hwange and drew against Monomotapa on Sunday, It shows there is improvement. We are in the right direction and I don’t see us failing to beat How Mine. We need this cup more than any other team.”
Dynamos will keep this trophy for good if they win it for the third successive season.
Mbada Diamonds have increased this year’s winners’ purse to a staggering US$130,000 making it the richest knock out tournament in the country.Advertisement

Harare City who also dropped two crucial points following their 1-1 draw against Chicken Inn in the league have a tough trip to Beitbridge for a date with Hwange.
Highlanders will play Buffaloes at Mucheke in Masvingo while CAPS United who have been boosted by the return of coach Taurai Mangwiro who had resigned in the after math of the team’s 3-1 defeat to Shabanie Mine on Sunday appear to have a tough clash with Chicken Inn at Ascot Stadium.