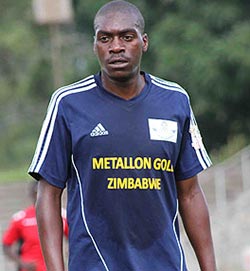 HOW Mine would be banking on in-form forward Kuda Musharu in Saturday’s Caf Confederations Cup second round, first leg against Nigerian side Bayelsa United at Barbourfields Stadium.
Musharu has been in top form, scoring six goals in four matches in this tournament so far.
With Bayelsa likely to provide them with stiff competition unlike in the previous rounds from were they have easily sailed through, there is no doubt Musharu is desperately needed to replicate the form he gas shown so far.
Hopes on Musharu comes from the whole nation as How Mine are left as Zimbabwe’s sole representatives in any continental contest following the exit of Dynamos from the Champions League.
The Bulawayo side coach Philani Ncube conceded Musharu is their biggest trump card.
“A squad is made up of several players and each had a role to play in the team. It therefore becomes important that the team thrives on teamwork.
“That is what we have been banking on all along. Kuda has been scoring a result of teamwork. The other guys are setting him up to score because a goal is a product of an attack build up,” Mabhena said.
“There is no doubt Kuda is doing a great job in the team. We hope he will continue with that against the Nigerian team,” he added.
Warren Dube and Timothy January who have been equally instrumental for How Mine are out injured.
How Mine sailed past Chuoni of Zanzibar in the preliminary round on a 6-1 aggregate scoreline before getting past St Michel from Seychelles in the first round courtesy of a 6-3 scoreline.
Their opponents Bayelsa saw off Kondzo of Congo Brazzaville 2-0 in the first round after receiving a preliminary round bye.Advertisement