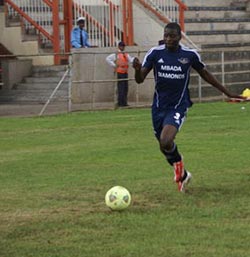 HOW Mine took a giant step into the Caf Confederation Cup second round after thrashing ST Michel 5-1 in the first leg of the first round at Barbourfields Stadium on Saturday.
Kudakwashe Musharu was the destroyer-in-chief after netting a goal in each half to raise his goal tally to five in the campaign.
Philani Ncube’s tactical substitution helped the Gold miners to a flying start in this first round as the hosts attacked relentlessly, launching wave after wave of attack in their opponents goal area.
They turned more lethal than ever with Timothy January and Morris Kadzola bossing their opponents in the middle of the park.
The industrious Musharu was at his best and opened the floodgates on 25 minutes having scored How Mine’s the opener just after the first quarter.
With forceful and precise passes from Thembani Masuku and Edmore Muzanenhamo, How Mine continued mounting pressure upfront.
The defence was hardly tested and veteran goalkeeper Ephraim Mazarura was only on spotlight when he faced the penalty spot on 33 minutes.
How Mine’s Nyasha Mukumbi had brought down St Michel’s Hassan Ali, who then equalised for the visitors.
When midfielder January and former Dynamos playmaker Kadzola came in the second half, How Mine were even more dominant.
Once again substitute Wonder Sithole dragged in the third goal to add more misery to a woeful St Michel.
The hosts enjoyed cutting midway and even unusual goal getters in Edmore Muzanenhamo were threatening in the last quarter.
Muzanenhamo was involved in the second goal scored by Thembani Masuku.
Musharu could have made it a hat-trick in the 80th minute but the referee disallowed it for an offside. Five minutes later, St Michel ruined it as the forceful Kadzola was brought down.
Mernad Mupera stepped up to net the fourth goal from the spot. Another well curved Muzanenhamo cross that landed on well positioned Musharu finished the goal harvest for How Mine.Advertisement