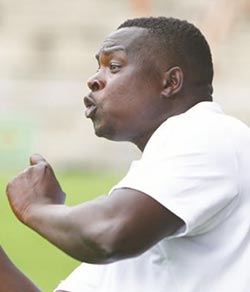 How Mine 2-0 Caps United
HOW Mine shot to the top of the Castle Lager Premier Soccer League on Wednesday after thumping Caps United at Luveve Stadium in Bulawayo.
With the win, the gold miners now top the standings with 16 points from eight matches before the other match featuring Highlanders and Harare City at Barbourfields on Thursday.
It only took six minutes for How Mine to make their intentions clear when Wonder Sithole ghosted in from the blind side to poke home when Caps defender Asani Nhongo decided to take a nap.
Caps had a chance to draw level from the penalty spot in the 29th minute after Xolisani Moyo had handled inside the box but captain, Tendai Samanja, saw his spot kick saved by veteran goalkeeper Ephraim Mazarura.
The match would not have been complete without Warriors striker Kuda Musharu on target.
The gangly hit-man glanced home a header in the 65th minute for his seventh goal of the season to seal maximum points for Philani Ncube’s men.
Meanwhile, at Gibbo, Triangle smashed Buffaloes 5-1 to ease their early relegation worries.
Richard Kawondera and Tinei Chitora each scored twice while Blessing Mazivisa compounded the Buffaloes woes.
Buffaloes had only arrived in Triangle two hours before the start of the match and fatigue seemed to have played against them.
At Ascot Stadium in Gweru, Evans Rusike rescued a point for former leaders Hwange as they came from behind to draw 1-1 against Chapungu, who had taken an early lead through Kalisto Maheya.
Elsewhere, ZPC Kariba maintained their unbeaten run when they drew 0-0 against Black Rhinos at Rimuka Stadium in Kadoma.
ZPC are unbeaten in eight matches but face their toughest test in Bulawayo at the weekend when they face How Mine.