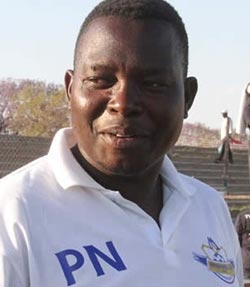 THREE players will miss How Mine’s Caf Confederation Cup second round, second leg on Saturday against Michel United of Seychelles after picking injuries.
The Bulawayo side is expected to leave for the Island nation on Thursday.
Head coach Philani “Beefy” Ncube Wednesday said Edmore Muzanenhamo, who joined How Mine from Division One side Ntabazinduna Prison had to be stitched on his lips on Tuesday after sustaining injury during an afternoon training session and he was doubtful for travelling.
Also out is Warren Dube, who suffered a knock on his knee during training last week and did not play the first leg at Barbourfields Stadium on Saturday while Xolisani Moyo also became another casualty at training on Tuesday after sustaining a deep cut on his head.
“Eddie (Muzanenhamo) will no longer be travelling to Seychelles. He was injured at training this afternoon and has three stitches on his lip while Xolisani Moyo had a deep cut on the head. They will both miss Saturday’s match.
“Warren has not been training after the knock at training last week and is also not part of the team. Be that as it may, the boys are raring to go, we have able replacements,” Ncube
said.
How Mine are expected to jet out of the country on Thursday via Johannesburg, South Africa to Seychelles where they will arrive on Friday morning.
The Bulawayo side walloped St Michel 5-1 to gain a healthy lead with leading Confederation Cup scorer Kudakwashe Musharu grabbing a brace, while the other goals came from Thembani Masuku, Menard Mupera and substitute Morris Kadzola.
If they sail past St Michel on Saturday, they meet winners between Bayelsa of Nigeria and FC Konzo of Congo in the second round.Advertisement