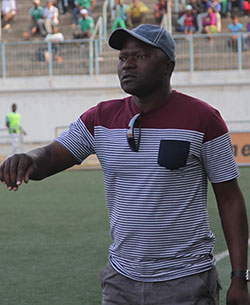 HOW MINE coach Luke Masomere has been fired for poor results, 23 matches into the Castle Lager Premiership season.
He has been replaced by his former assistant Jeremiah Makota as interim head coach until the end of the season.
Sheunesu Chaka also bounced back as an assistant coach.
This comes after the Bulawayo side lost 0-3 to FC Platinum on Wednesday, just three days after they had been beaten 2-1 by Tsholotsho, again, at home.
That stretched their unbeaten run to seven matches, which has seen the Metallon Gold Zimbabwe-owned side drop from fourth spot in less than four weeks to eighth place with 31 points, a massive 18 below city neighbours and leaders Chicken Inn.
Masomere though chose to be diplomatic, saying; “I have resigned due to poor results.”
Club chairman Alpha Mutumbura said action had to be taken due to a poor performance in the second half of the season.
“Our performance in the second half was very bad and two more losses would have seen us drop into the relegation zone. So, action had to be taken to arrest that decline,” he said.
Sources indicated that decision to fire Masomere was taken on Monday after they their loss to Tsholotsho at White City Stadium, but other members of the executive opted to offer him a chance against Platinum, seeing that the match was just 48 hours away.
Masomere seemed to know his fate even before the Platinum match as he told the media after the loss on Wednesday that “there are third forces behind the club”.
He blasted the club’s executive for buying old players, notably the likes of Mernard Mupera, 38, Gilbert Banda, 34, and Tapiwa Khumbuyani, 32.
Masomere though was behind the acquisitions of former Dynamos midfielder Devon Chafa, the perennially crocked Tawanda Muparati, aged 31, who has played less than 30 minutes this season, his homeboy from Masvingo Neftary Ndale and Moses Gutu, whom he coached at Buffaloes.
Rahman Gumbo, who is currently at Gaborone United in Botswana, Harare City assistant coach Mkhuphali Masuku and Caps United assistant Mark Mathe have been touted as possible replacements for the 2016 season.