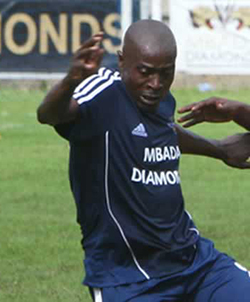 How Mine have been boosted by the return from injury of veteran midfielder Menard Mupera who is available for Sunday’s Chibuku Super Cup quarterfinal clash against Highlanders at Hartsfield Stadium.
Mupera is coming from a long layoff that has seen him miss a huge chunk of the season so far.
Coach Luke Masomere welcomed back the defensive link-man who will be facing his former club Highlanders.
“Menard Mupera is back and there is no doubt about his experience. His contribution is always valuable in the team,” Masomere said.
The gold miners however will be without injured goalkeeper Donovan Bernard as well as Nyasha Mukumbi and tear-away winger Timothy January.
“We are not crying that these guys are unavailable. There are always enough replacements. We are looking forward to the match,” Masomere said.
The nomadic coach watered down expectations on his team against the troubled Bulawayo giants.
He insisted their sights are not glued on the Cup because he is building a team for next season.
“As I have always said, we are building a team for next season. Yes it would be good for us if we win this game but we are not under pressure for a win,” he said.
Highlanders on the other hand would be keen to recover from last week’s TM Pick n Pay Challenge Cup humiliation by Dynamos.