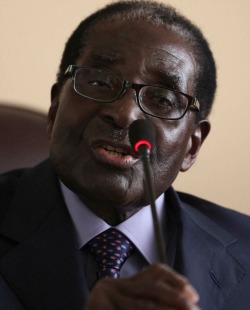 FROM the moment President Robert Mugabe said he would step down if he lost the election, it was clear that he knew he would win it. If he had not been certain of winning, he would not have called the election.
Power – military, political, bureaucratic – is what he understands, loves and has enjoyed for 33 years. It’s more than love – it’s an addiction. Other African presidents try to cajole him. He charms and patronises them. British prime ministers and American presidents lecture him. He swats away their words and plays the colonialist card. Opposition movements challenge him. He crushes them with violence. Then he charms them.
Mugabe will leave power when he wants to – or when his body gives out.
Right now he will be exultant. He took on the internal opposition, his fellow African presidents and the western powers – and won. Yes the voting rolls were manipulated. Yes his government managed the polling stations. Yes mobile phones, that great democratic information exchanger, were shut down. Yes the vast Zimbabwean diaspora – the country’s brightest and most ambitious – were not able to vote. Yes everyone assumed the MDC would win and so became complacent. And had the result been a 51% – 49% split, there might have been a case to challenge it. But a 61% – 33% victory is decisive.
Zanu PF also won 150 of the 210 parliamentary seats, a two-thirds majority which allows it to change the constitution and amend laws. Former Nigerian president Olusegun Obasanjo headed the African Union election observers. His key vote had imposed Commonwealth sanctions on Zimbabwe in 2003 but now he passed this election as credible and fair. Game, set and match to Robert Gabriel Mugabe.
And, I suspect, many middle class Africans throughout the continent and the world will stealthily clench a fist and whisper “yesssss” – without of course agreeing with what he has done to Zimbabwe. They would be appalled if such a man took over their own countries but Mugabe has stood up to the former colonial powers and won. It may have been a 20th century battle but many people in Africa feel that the relationship is still not one of equality: multi-party democracy has been imposed, resource nationalism is blocked by a western-controlled economic system and attitudes to Africa are still patronising and sometimes bullying.Advertisement

Apart from state control and manipulation of the election process there are two other factors that might explain the scale of Mugabe’s victory. One is a mistrust of Morgan Tsvangirai. Not that people think he is a bad person, but he lacks both the leadership skills to draw Zimbabweans together into a vision of a new Zimbabwe and the political and managerial skills to make it happen. Up against a bureaucracy and, more importantly, a security system which is personally loyal to Mugabe, Tsvangirai would have stood little chance of pushing through real change.
The second factor is one I have heard expressed many times in Africa: do not upset a Big Man. If he is a Big Man and is president and wants to go on being president, then let him have it. Otherwise he will create problems. “I will vote for him because he is president,” is a phrase I have heard in many elections in Africa.
What will Mugabe do now? He may arrange for a successor. Until now he has been manipulating the rival candidates but now he needs to ensure that, if he steps aside from the day-to-day presidential chores, he and his family will be safe. But even if he allows a new president to be sworn in he will retain ultimate power as president of the party, much as Julius Nyerere did in Tanzania in 1985 when he stepped down but retained leadership of his party.
I also suspect Mugabe will now go into reconciliation mode as he did after his first (also unpredicted) election victory of 1980 and again after he brutally crushed the Ndebele uprising in the mid-1980s. Now he will deploy his considerable charm and hold out a hand to African and western governments that have criticised him in the past.
At home he may offer posts in government to MDC leaders, maybe even to Tsvangirai himself. He may not fully implement the indigenisation programme which demands that black Zimbabweans must own 51% of all foreign-owned companies, just as he failed to implement socialist policies in the 1980s after he took power. In all these moves, the only question in his mind will be: will this keep ultimate power in my hands?
Richard Dowden is the director of the Royal African Society and author of Africa: Altered States, Ordinary Miracles.