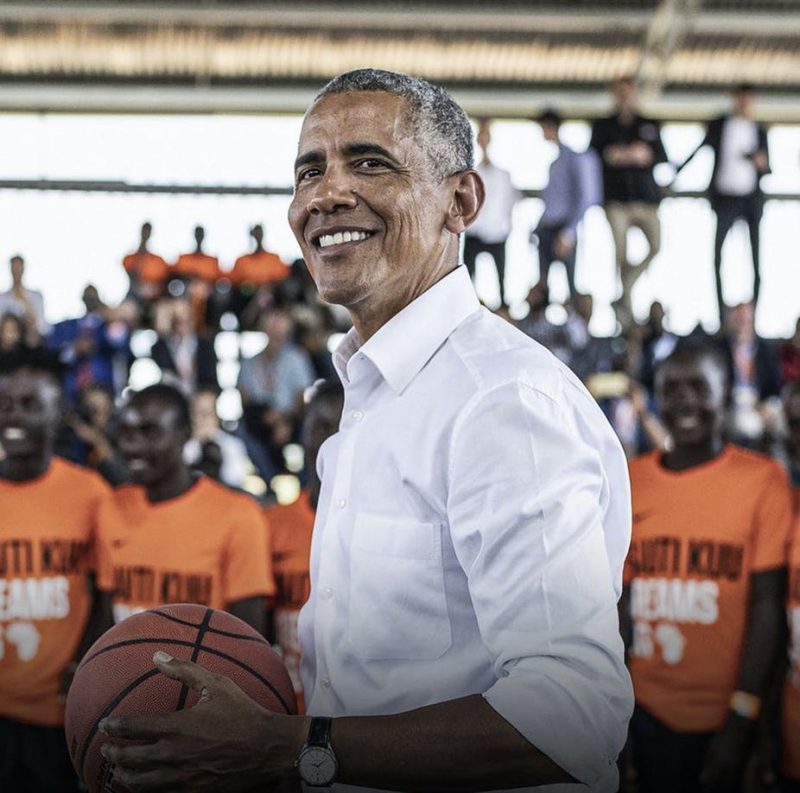 FORMER US president Barack Obama’s decision to invest in the National Basketball Association’s Africa venture reflects a lot about his past – his basket playing youth and his African roots.

It also signals that his future ambitions stretch beyond US borders.

The inaugural competition consisted of 12 teams from 12 different countries. The Egyptian team, Zamalek, won the first championship over a Tunisian squad.

Obama decided to invest, marrying his love of basketball with his desire to contribute to African social and economic development. Through The Obama Foundation, he is helping train African leaders of the future as well as to promote the continent globally.

He played in the Senate gym during his time there and was known to have celebrities like Magic Johnson join in on his White House pick-up games.

During a campaign event for President Joe Biden last November, cameras caught Obama casually sink a three-pointer while passing through a school gym. His basketball skills earned him some street credentials as a politician, helping the brainy Ivy-leaguer seem more grounded.

Sports has historically been a useful tool for international diplomacy, a point Obama stressed in the announcement of his deal with the NBA.

He isn’t the first president to go this route. Former US president Richard Nixon used table tennis to thaw relations with communist China in the 1970s. His campaign was labelled Ping Pong diplomacy.

Decades later, the US State Department officially established the sports diplomacy programme in response to the September 11 terrorist attacks in 2001. The programme – which is still going strong today – is aimed at reaching out to young people in middle eastern countries. Since then, the programmes have expanded globally with a wide range of initiatives.

While Obama’s role in NBA Africa is not directly linked to US diplomatic efforts, his presence serves as a type of informal diplomacy in a region where the US has struggled to sustain a constant positive diplomatic role.

For several decades the National Basketball Association has been focused on expanding into the international market as a source of talent, revenue and fans.

There was a long campaign to bring a Chinese star to the League which culminated in Yao Ming joining the Houston Rockets in 2002.

The NBA and its players have had a longer relationship with Africa. In 1959, the US State Department sponsored Boston Celtics star Bill Russell’s tour of West Africa. As a result of his time in Africa, Russell bought a rubber plantation in Liberia. The media praised Russell’s venture as proof of black capitalist success and his visit raised the profile of basketball in the region.

Nigeria’s Hakeem Olajawan became the first African player in the NBA in 1984, paving the way for dozens of of future NBA stars from Africa, including Manute Bol, Dikembe Motumbo, and dozens of current players.

The NBA began its Basketball Without Borders programme in 2001, beginning in Europe at the same time they were working to bring Yao Ming to the US.

From 2003 it has been engaged in expanding its presence in Africa drawing on the popularity of Olajawan and others who had begun to succeed in the NBA. Since retirement Olajawan has been NBA ambassador in Africa. He also made a special appearance for Team Africa at the 2015 NBA Africa exhibition game in South Africa.

In 2003 the NBA expanded its annual Basketball Without Borders programme to Johannesburg, South Africa, not in the region where the NBA’s African players had originated, but in the most lucrative market. The NBA opened its Africa office in Johannesburg, South Africa, in 2010 and continued to expand efforts across the continent culminating in the launch of the international tournament in 2021.

Recently, US presidents and their families have become increasingly connected to professional sports. The difference in Obama’s case is the international scope of his engagement, showing that he sees himself playing a role outside the US.

Over the past year, the former president has increased his public presence. He joined the Joe Biden campaign leading up to the November election, released his latest book, A Promised Land, and launched a podcast with singer Bruce Springsteen.

After four years of relative silence during the Trump presidency, Obama seems to be re-emerging from the shadows.

Obama and his wife, Michelle Obama, were voted the Most Admired Man and Woman in the world in a 2020 survey across 42 countries. His popularity will surely boost the prospects for NBA Africa and expand his own brand as a global entrepreneur and philanthropist.

While the expansion of the NBA’s reach may help basketball’s growth in Africa, there is no doubt that the combination of the world’s premier basketball league with the most popular African-descended leader will do much to promote the league’s brand as well as help shape future growth of basketball on the African continent.