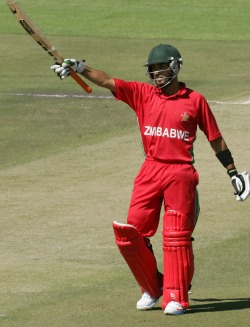 IT’S not just when he stresses on the ‘r’ while saying cricket that it comes through. The thick sub-continental accent in fact is unmistakable as it is evident in Sikandar Raza’s speech. And at times, he doesn’t mind breaking into some chaste Urdu either. If anything, he yearns to speak in his mother tongue, never letting go of an opportunity to do so.
Two months ago, the 27-year-old Raza became the first non-residential player to represent Zimbabwe in international cricket. Over the last couple of years, world cricket has witnessed a trend of Pakistani expats plying their trade in adopted lands, starting with Imran Tahir’s well-publicized move to South Africa and Fawad Ahmed seeking exile in Australia. But Raza’s is not your routine immigration story, laden with several obstacles and social challenges.
His move to Zimbabwe came more via a touch of serendipity. Tasadaq Hussian Raza, Sikandar’s father, had moved to the African nation back in 2002 to expand his motor-parts business ambitions from Japan. The junior Raza, meanwhile, was busy preparing for a career in the gargantuan world of software, pursuing a degree in Scotland.
He dreamt of becoming a fighter pilot through his teenage years and it was only the heartbreak of missing out on that goal that pushed him into considering a move to Zimbabwe.
“He was always a good cricketer since childhood. When he made a complete switch to Harare three years ago, my father asked him to try his luck with cricket here. Somehow he saw some potential in Sikandar and believed in it,” says younger brother Taymoor.
He also adds that his father and two other uncles too had aspired for representing Pakistan during their youth but moved onto other things.
While scoring runs never proved too much of a hassle for the right-hander, there were other legal hassles to be sorted out. In fact, he had been playing semi-professional cricket even in Scotland and before long he was one of the star sensations in the local league around Harare.
He finished as the highest run-getter in the T20 tournament and was third highest in the 50-over league. Getting the qualification to don Zimbabwe colours though proved to be a lengthy and frustrating wait. And it was only following the persuasion of selector and former captain Alistair Campbell that Raza agreed to remain patient and bide his time.Advertisement

Belvedere, where the Razas reside, has been home to a majority of the city’s Asian population. And while their fight to create their own identity in society here is an on-going one, they’ve at least found a hero in that quest in the form of Raza.
It wasn’t surprising then to see a huge section of Asian fans at the Harare Sports Club not supporting India but instead throwing their weight behind the home team. Raza didn’t disappoint by scoring a timely and stroke-filled 82.
“My whole community came to watch me the other day. They didn’t expect anything from me but they just wanted to see me play against a top side like India,” he says.
Having now established himself at the top of the order for Zimbabwe, Raza is hoping to make the most of his promising start.
But while cricket has brought some fame and international coverage for the soft-spoken opener, he insists that the admiration that he cherishes the most is that of his grandfather back in Sialkot.
“When he found out about me playing international cricket, he said that I had made the family really proud all around the world,” says Raza.
Following in South African Hashim Amla’s footsteps, Raza too has refused to don the logo of one of Zimbabwe Cricket’s sponsors as a result of it being an alcohol brand.
“Before the series, I told the coach that I couldn’t wear the logo as my religion doesn’t allow the consumption or even marketing of alcohol products. He said that he respected my decision and that he will speak to the board and sort it out, which they have,” he explains.