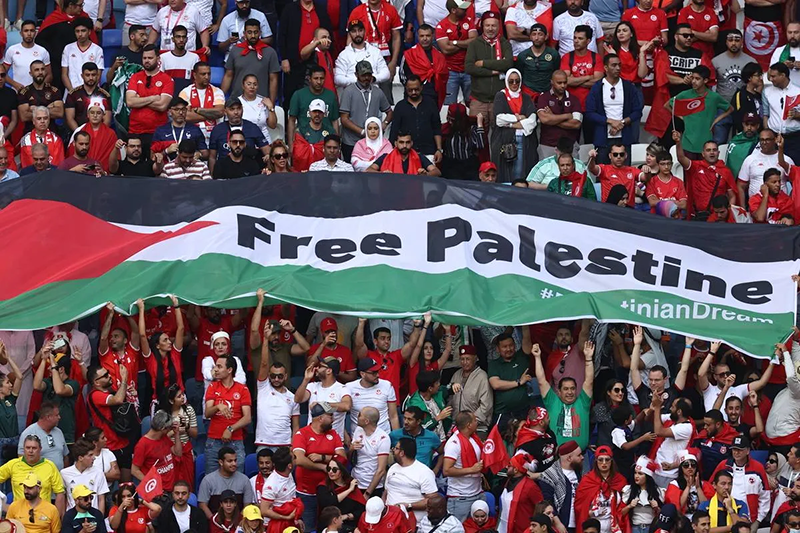 WHEN in 2010 Qatar was awarded the right to host the 2022 World Cup tournament the Gulf kingdom became the focus of an offensive and disparaging campaign. Qatar was accused of mistreating migrant workers engaged to build World Cup projects.

The campaign against Qatar as host nation involved Britain, Germany, Denmark, the Netherlands, Israel, the UAE, and Saudi Arabia. Demonstrations took place outside the Qatari Embassy in London, with the slogan “Qatar: stop funding terrorism.” They were reportedly run by Sussex Friends of Israel and the Israeli Forum Task Force, joined by UK Lawyers for Israel and Stand With Us (SWU).

Sussex Friends of Israel is linked to Israeli Zionist faction known as Over the Rainbow. SWU is a right-wing pro-Israel lobby group working closely with the Israeli Ministry of Foreign Affairs. According to the former Israeli Deputy Foreign Minister, Israel uses it to ‘amplify our power’ and ‘for leverage’.

Until 2009 Qatar and Israel had diplomatic relations, but after 22 days of unrelenting aerial attacks with intensive ground incursions, when Israel killed some 1,400 Palestinians, the majority of them civilians, including women and children, Qatar severed diplomatic ties with Israel. This explains the protests against the Qatar World Cup that were depicted as defending LGBTQ and workers’ rights. Actually it was not just a matter of “human rights” but a geopolitical and foreign policy strategy of Israel.

Despite all these attacks against Qatar, the wealthy Gulf state was the biggest recipient of UK arms between April-June 2022. Since it won the right to host the World Cup, Qatar has been granted £3.4bn ($ 4,1bn) worth of weapons sales licenses by Britain.

Under such circumstances special flights were organised for Israeli fans and journalists to fly to Doha for the World Cup. They were in festive mood, bringing with them a cake decorated with Qatari and Israeli flags. The intention was to cover the World Cup and befriend the Arab public, hoping that with the Abraham Accords that Israel signed with Arab regimes, the issue of Palestine would have disappeared from the Arab consciousness.

Little did they know that while Israel has acquired the recognition of some Arab rulers it has never been accepted by the Arab masses. And so the Israeli fans and reporters said once in Qatar they were surprised to find a less than welcoming atmosphere among Arab fans, with Palestinian flags and banners in evidence everywhere.

They were surprised at the level of hostility that they encountered in Qatar. A Palestinian journalist retorted by saying, “I am surprised that they are surprised since what they are doing daily in Palestine is all over the world media (except in Israel maybe), but every action has a reaction”.

And so social networks were awash with videos of fans from the Arab world strongly avoiding offers to engage in conversation with Israelis. Many simply walking away from Israeli reporters. Arab fans refused to talk to Israeli reporters because they did not want to confer legitimacy on Israel’s military occupation and apartheid. For them the act of speaking to Israel was a form of recognition of the displacement and dispossession of the Palestinian population.

Fans from Morocco, one of the five nations that signed the “Abraham Accords,” were unwilling to appear on Israeli TV. They unfurled a “Free Palestine” banner during their country’s victory over Belgium. There were shows of solidarity with Palestine when Moroccan and Tunisian fans held up “Free Palestine” banner in the 48th minute of their matches. While celebrating their win over Spain, Morocco’s national team unfurled a Palestinian flag on the pitch. They also raised the Palestinian flag while celebrating their victory over Canada.

During the match between Tunisia and France a football fan invaded the pitch, waving a Palestinian flag. When he was escorted out by the security, crowds in the stand chanted “Falastin! Falastin!” (Arabic for Palestine).

Israeli sports reporter Tal Shorrer said, “I was so excited to come in with an Israeli passport, thinking it was going to be something positive. It’s sad, it’s unpleasant. People were cursing and threatening us.”

Actually the Israeli Foreign Ministry advised Israelis to keep a low profile in Doha. Some of them found it more prudent to lie about their nationality.

One former Israeli football star, now a commentator, posted a video showing a Qatari police officer driving him in a golf cart. He got a shocked reaction from the policeman after telling him he was Israeli. He then said he was joking and that he was actually from Portugal. The policeman said he would have stopped the cart and kicked him off if he was really Israeli. When the commentator asked the driver why, he replied, “I’m Palestinian”.

Moav Vardi, chief international correspondent for the Israeli Public Broadcasting Corporation (KAN), told CNN he had expected some hostility from Palestinian and Arab fans, but not the level he experienced in Qatar. Most Arab fans he tried to interview, he said, would just turn away when they discover he was Israeli. Few would even be engaging in “verbal assaults”. Soon, he was recognized from videos that had gone viral, so he decided to remove the KAN logo from his microphone.

Arab fans were also incensed by the double standards shown by FIFA and UEFA. While Ukraine and its NATO allies got the football bodies to suspend Russia from competing in their tournaments over Russian invasion, Palestinian efforts to get the same treatment for Israel over its invasion and occupation of Palestinian territories failed.

Yet the irony is that the Qatar World Cup will be remembered in a way for the historic victory of Palestine over Israel. Khaled Abu Zuhri, a Gazan sports commentator said, “Palestine had won without having sent either a team or a single player to Qatar or playing a single game”. The general perception was that Palestine was the 33rd country at the World Cup

Among the spectators at the World Cup was Jared Kushner and his wife Ivanka Trump. The outpouring of support for Palestine expressed by Arab fans possibly made it clear to them how badly Kushner miscalculated when he and his father-in-law, former president Donald Trump, persuaded some Arab rulers to sign cooperation deals with Israel that discarded Palestinian rights.

In his memoir Kushner claims to have brokered “a true turning point in history” when the UAE, Bahrain, Kosovo, Morocco and Sudan signed “peace” agreements with Israel. Yet unsurprisingly the reaction by Arabs fans and players at the Doha World Cup made it abundantly clear that there was hardly any public support in the Arab world for “peace” with Israel while millions of Palestinians continue living under Israeli military occupation, settler colonialism and Apartheid.

The Arab fans were no doubt aware that Israel would not be doing all this with impunity without western support such as $3.8 billion in US military aid plus $8 billion in loan guarantees.

Nizar Visram is free-lance writer from Tanzania. He can be reached at nizar1941@gmail.com