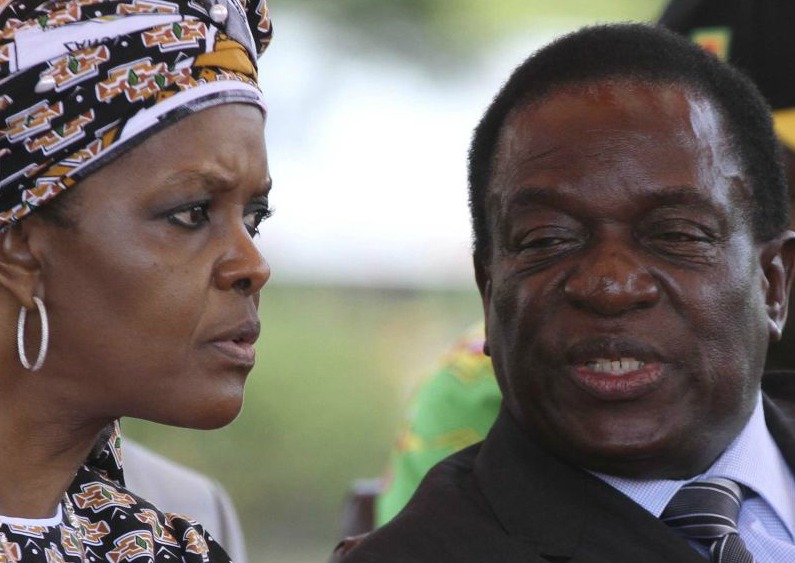 IT HAS allegedly happened to Jacob Zuma, David Mabuza, Emmerson Mnangagwa and countless others – being poisoned is just part of the political job, it seems. Imraan Coovadia’s latest book, The Poisoners: On South Africa’s Toxic Past, takes a fascinating look at the southern African preoccupation with poison.

When Deputy President David Mabuza recently took a six-week sick break in Russia, at state expense, everyone knew the reason. It was because he was still suffering the after-effects of being poisoned while serving as premier of Mpumalanga.

Stories of political poisoning in South Africa are now so routine that they hardly warrant a raised eyebrow – but why is this the case, and how did we get here?

These are two of the questions tackled by writer Imraan Coovadia in his latest non-fiction work, The Poisoners: On South Africa’s Toxic Past.

In one sense, the answer is quite simple. Poisoning, suggests Coovadia, is “the conspicuous result of an underground current in our history that includes counter-insurgency, assassination, intrigue and suspicion inside revolutionary movements”.

Poisoning is also not new to the African continent, with a history intertwined with sorcery, witchcraft – and, in at least one case, the judicial process. In Madagascar in the 17th century, someone accused of a crime was forced to ingest poison. If they survived, they were innocent.

Although poisoning may feature continent-wide, Coovadia’s survey largely restricts itself to Zimbabwe and South Africa from the latter half of the 20th century to the current day.

This still leaves him with abundant material to cover, and his initial accounts of poisoning in latter-day Rhodesia are some of the book’s most intriguing.

Alan Brice, a member of the British Special Air Service, was recruited to kill Robert Mugabe via poison during the 1979 Lancaster House negotiations in London.

The plan was to lodge poison inside hollow ammunition, a technique Brice perfected by killing dogs. At the last minute, Brice’s handlers suspended the assassination.

That, it emerges, was the tip of the Rhodesian poison iceberg. Coovadia’s research into Rhodesia’s notorious armed spies, the Selous Scouts, reveals that the gung-ho troop killed an estimated 200 people through poisoning the water supply in colonial Malvernia, now Chicualacuala.

The Rhodesian programme saw poison injected into tinned food and medicine, and brushed on to clothing. In this way, the hope was to kill guerrilla fighters, but inevitably civilians fell victim too. The numbers of poisoning deaths were staggering: in the first half of 1977, 800 guerrillas were killed by poisoning alone.

Van der Byl, one of several astonishing characters in Coovadia’s book, is described as someone who “wanted to be a film star and play Tarzan, but had to content himself with holding the world record for shooting the world’s largest elephant and marrying Princess Charlotte Maria Benedikte Eleonore Adelheid of Lichtenstein”.

Another bizarre character unearthed by Coovadia: American biological researcher Steven Jay Hatfill, who was present both during a 1978 anthrax outbreak in Rhodesia and during a 2002 anthrax attack in the US.

He was busy in South Africa during the 1980s and 1990s too, training guards for Eugene Terre’Blanche’s Ystergarde (Iron Guards) and even travelling on a South African expedition to Antarctica.

Then there’s Michael Swango, an American doctor who came to work in Zimbabwe in 1994 and is believed to have been responsible for the deaths of around 100 patients in Zimbabwe and the US by poisoning.

Swango was subsequently defended by Zimbabwe’s most prominent human rights lawyer, David Coltart, in an unfair dismissal case against his Zimbabwean hospital.

Swango’s defence for the armoury of poisons that authorities found among his personal effects: “I thought I had come to a jungle, and out of the goodness of my heart had brought my own drugs.”

The arrival of independence in Zimbabwe did not put an end to poisoning scandals. Indeed, Coovadia quotes an anthropologist as suggesting that poisoning is particularly common in post-colonial societies – one of a number of intriguing ideas in the book that feel slightly underdeveloped.

As was all over the news at the time, Zimbabwe’s then vice- president Emmerson Mnangagwa had to be flown to South Africa in 2017 to be treated for alleged poisoning.

Was the culprit his political enemy Grace Mugabe, using tainted ice cream from her famous dairy farm? Or were two Mugabe loyalists – with whom Mnangagwa had shared a meal of sandwiches, grapes and samoosas – to blame?

South African doctors reportedly diagnosed palladium poisoning, but much about the incident – including whether poisoning actually happened – is still shrouded in mystery. Coovadia reports that whatever the case, Mnangagwa now only eats food from random outlets of OK Bazaars or small takeaway outlets.

Rhodesia’s poisons boffin Symington would go on to be made head of anatomy at the University of Cape Town before his death, which was fittingly caused by exposure to poison.

He is known to have been connected to South Africa’s own biological weapons czar Wouter Basson – although “the exact relationship between Basson and Symington, and the methods and materials they exchanged in the cause of white supremacy, are veiled”, Coovadia notes.

The chapters of Coovadia’s book dealing with Basson and his infamous Project Coast experiments may be more familiar to South Africans, but Coovadia still manages to unearth apartheid-era facts that read like fiction.

In 1984, for instance, the US Centers for Disease Control sent eight consignments of viruses – including Ebola and Marburg – to Pretoria. (This detail may be grist to the mill of those who maintain that the Covid-19 virus was deliberately cooked up in a lab and released.)

Coovadia suggests with some plausibility that Basson was probably “one of the most prolific poisoners in history”.

Project Coast aimed to create a toxin that would be undetectable in an autopsy – the Holy Grail of poisoners – or one that would have a lengthy wasting effect on a victim and eventually cause his death.

One hope was that Nelson Mandela could be given cancer while still in prison. That didn’t work out, but other attempts met with more success.

The Reverend Frank Chikane was a victim of poisoning twice, once in the US after wearing clothes that had been removed from his suitcase and brushed with poison.

Project Coast’s in-house inventor was a man called Philip Morgan, a Rhodesian who sounds a bit like a psychopathic version of the James Bond character Q.

Morgan made screwdrivers with a handle concealing a syringe of poison, folding spoons with a poisoned compartment and wore a signet ring that slid across to reveal a reservoir of poison.

“According to criminologists,” writes Coovadia, “there are common features of criminal poisoning. He or she is given to daydreaming, rejects the idea that life has a moral foundation, and is likely to be familiar with medical materials as a doctor, nurse, chemist or pharmacist, dentist or laboratory technician.”

Although many figures in apartheid history probably qualify for rejecting “the idea that life has a moral foundation”, it’s hard to think of any who embodied that denial more than Basson.

The doctor taught soldiers how to sedate prisoners with ketamine before their bodies were tossed into the ocean from aircraft. He worked on developing contraceptives that could be administered to black crowds without their knowledge as a means of population control.

And Basson got away with it all. At Basson’s fraud trial in 2001, Coovadia reminds us, he invoked a shadowy network not unlike that gestured to by Jacob Zuma at the Zondo Commission, involving “Libyan spymasters, German aristocrats and Swiss intelligence agents”.

Basson’s lawyer was also allowed to dispute, in open court, the testimony of a poisoning witness by saying that “catatonia is particularly prevalent among black people, far more so than whites. Under severe stress, black people enter a trance-like state and this is what had happened to this person”.

Basson was acquitted of all charges.

“Dr Death” was not alone in his fascination with biological weapons in the apartheid security forces. Lothar Neethling, second in command of the South African police force, was a global expert on poisons.

The brutes at Vlakplaas would approach him for “knock-out drops”, and tended to (unnecessarily) shoot their victims after poisoning them. Coovadia surmises: “The gratuitous use of both poison and bullets suggests a certain ritualistic or fetishistic dimension to the killings.”

On the other side of the political divide, poisoning was happening too. There was poisoning in the ANC camps as part of what was described at the TRC as “war psychosis”.

In one such camp, there was also the mysterious death of ANC cadre Thami Zulu in 1988, possibly from poisoning, in which Zuma has long been implicated.

Indeed, poisoning has shadowed Zuma’s life in a number of different ways. Coovadia revisits March 2008, when deputy director of the NPA Mokotedi Mpshe was sent a letter reportedly laced with “a deadly nerve poison” similar to that used to try to kill Chikane two decades earlier.

Zuma himself has claimed to have been poisoned on three separate occasions. He once said he was poisoned “because South Africa joined BRICS”, a geopolitical shot across the bow he has never expanded on since.

The most public of his poisoning incidents was that in which his estranged fourth wife Nompumelelo Ntuli was implicated, and paid dearly for it – despite the fact that the National Prosecuting Authority would conclude in 2019 that “there is no evidence that Mr Zuma has been poisoned”.

This gendered aspect of poisoning, which sees women far more often accused of administering poisons than men, is one that might have borne more exploration by Coovadia.

Ace Magashule’s right-hand man Chris Ackeer has said he was poisoned in March 2019. David Mabuza, meanwhile, says he was poisoned for the first time at his birthday party in 2015 in Bushbuckridge.

Mabuza himself is suspected of involvement in the death by poison of Mpumalanga political rival James Nkambule in 2010 – and so the cycle of poisoning allegations continues.

What do most of these people have in common? “In almost every case,” writes Coovadia, “the politicians who told stories of poisoning, or believed that they had themselves been poisoned, belonged to the faction headed by Zuma and Magashule.”

It’s a simple but brilliant observation crying out for expansion – as is Coovadia’s throwaway suggestion that the Covid-19 pandemic may have brought an end to the “poisoning panic”.

In his introduction to The Poisoners, Coovadia writes that technically this research should have been the job of prosecutors, historians or journalists. Maybe so, but who better than a novelist and literary scholar to parse the meaning of this intriguing darkness?