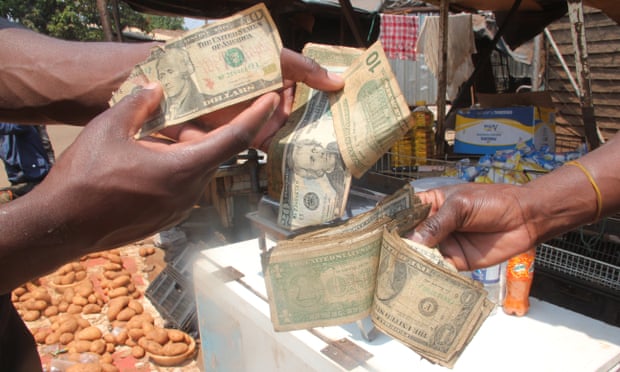 Street traders with US dollars at a market in Glen Norah, Harare. Money dealers say they are being scapegoated in a government crackdown that blames them for a drop in the value of the Zimbabwean dollar.
Spread This News

IN time-honoured street hawker tradition, Kaitano Kasani is using charm and persuasion to get people to sell him their tattered US banknotes.

Kasani, 42, bellows through a megaphone as he walks through Glen Norah, a township in Harare, in the sweltering November heat.

“Bring all your old and torn notes. I have a good rate today. There is no other better deal in town,” Kasani shouts.

“Most of my clients are shocked that I actually buy such money. They love me for that,” says Kasani, showing a handful of filthy dollars which would be rejected in supermarkets or other businesses.

Zimbabweans are suspicious of banks and prefer to keep their money under pillows and beds.

In previous crises, hyperinflation wiped out millions in savings, particularly in 2008. Now, there is a lack of favoured banknotes as they wear out faster than replacements come into circulation.

Shortages have led to the government telling banks and retailers not to reject old or worn US dollars, but many defy the order.

Dealers either mend them or sell them on to others who will bribe or otherwise persuade senior bank officials to exchange large quantities.

“These torn notes are more valuable to me than new ones. These old notes, when taken to the bank, will be replaced at the same value, yet we would have bought them at nearly half the original value, depending on how bad they are,” says Kasani.

“All I need is the serial number and the necessary features for me to take.”

Kasani sells old notes to business people and other cash dealers at 80% profit.

His new business has sustained his four children after he lost his job in manufacturing two years ago.

“This is quite lucrative; I actually got some assets through this business. I was one of the first people to buy such money in Banket [north-west of Harare] and other surrounding areas. It is just that the trade is now flooded, so I may have to concentrate on other things,” he says.

The country decommissioned the Zimbabwean dollar after it was destabilised by protracted periods of hyperinflation. It was reintroduced in 2019 despite warnings from economists that the country did not have enough foreign reserves to sustain it. At that point transactions in US dollars were prohibited, but as cash shortages threatened business, the government backtracked to allow traders to accept the US currency again last year.

Now, shortages of small US dollar denominations are leading to a boom in torn notes dealers.

In central Harare, 36-year-old Munengami* keeps an eye out for plain-clothed police patrolling in a popular area for illegal trading. Dealers, some with babies strapped on their backs, endure constant run-ins with police, who have launched a campaign to remove illegal money changers.

A government crackdown blames traders for a plunge in the value of the Zimbabwean dollar. Money dealers say they are being scapegoated for the government’s economic failures.

“They know that we are not the problem here. We do not have the power to raise the exchange rates. Government needs to deal with hose businessmen who flood the streets with local currency, which automatically reduces the value of the dollar,” says Munengami.

Zimbabwe’s vice-president, Constantino Chiwenga, has warned of harsh measures against traders, with the government setting up an intelligence unit to fish out “saboteurs” and “fraudsters”. 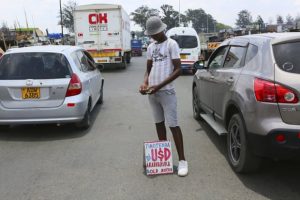 A currency trader counts his money in Harare. Shortages of small US dollar denominations have caused a boom in dealers trading torn notes.

As the Zimbabwe dollar continues on a “death spiral”, losing ground against the US dollar, economists have called on the government to make the US dollar the only unit of exchange.

But the finance minister, Mthuli Ncube, ruled that out.

“We cannot adopt the US dollar alone as the official currency. You were there before and there were queues at banks, huge foreign currency deficits and you had deflation. That was because of the US dollar,” he says. “It is not a good idea, and it will be suicidal to do so.”

“The government is firefighting, and that explains why we really haven’t seen much of a change … We should get down to brass tacks and deal with root causes, which are really rooted in supply, and not symptoms of the problem,” says Machadu.

Inflation fell from 840% in July last year to 50% in August but has been sliding up again, to 54% in October according to the Zimbabwe national statistics agency (Zimstat).

“I am a teacher by profession and the day I converted my salary to US dollars and got $50 [£37], I knew there was no future for me in teaching,” says Munengami.

“I buy torn notes to sell to my clients. It is more profitable than forex [foreign exchange] vending since I determine the price. I sell these notes to shops and businesspeople, at 20% profit.”

A few yards from Munengami, Amina Banda, 34, does a deal with a man inside a parked SUV with her baby strapped on her back.

“I am always nervous that the police will arrest me, but this is how we operate on the streets. I do not trust anyone, so whenever a transaction happens, I always maintain a safe distance so I can escape. Sometimes, the police come in plain clothing disguising themselves,” she says.

“I have a family to feed so I have to stick to the streets.”

*Partial name used at the request of interviewee