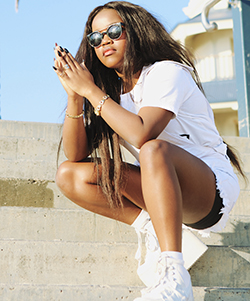 BEFORE Tkay Maidza was performing her up-tempo, synthpop hip hop to audiences around the world, she was an up-and-coming tennis star, trained by Lleyton Hewitt’s former coach.
Many would be familiar with the 2013 earworm ‘Brontosaurus’ that announced the then 17-year-old Maidza to Australian radio airwaves, and helped catapult her into a highly successful music career. But few would know about Maidza’s tennis background that had her practising every day, chasing a career in the sport.
Upon the release of her debut album ‘Tkay’, Maidza spoke to Fox Sports Australia about her unorthodox path from tennis to music.
Takudzwa Victoria Rosa Maidza — aka Tkay Maidza — moved from Zimbabwe to Australia with her family as a five-year-old. She began playing tennis in primary school and continued competing until her final year of high school. Maidza lived in Western Australia before settling in Adelaide six years ago.
Tennis was a huge part of her life.
“I played soccer for a while but had a leg injury. They said I wasn’t supposed to play sport. It was some knee growth thing. Somehow when I played tennis it didn’t affect me, so I just ended up playing tennis heaps and really liked it,” Maidza, now 20, said.
“I played every day and would have three private sessions every week and about four group sessions.
“I was training about five days a week and on days I wasn’t doing that I’d be playing in a match.”
At selective sports institution Henley High School she studied tennis, and played in junior tournaments across the country, sometimes even competing in tournaments with prizemoney on the line.
She’d come across the likes of future tennis stars like Thanasi Kokkinakis around the school sports circuit and honed her two-handed backhand with Peter Smith, Lleyton Hewitt’s old coach, at his tennis academy.
Her idols were Serena Williams, Ana Ivanovic, Maria Sharapova and Novak Djokovic, the latter of which she knew early on was on track for greatness.

“Novak was probably my favourite, especially when he was first coming up,” Maidza said.
“He won one of his first ATP tournaments in Adelaide in 2007, which is really funny because I was there watching it. It was really cool, because I could tell that was the start of something amazing.Advertisement

“You can tell when someone has that certain fire about them. You watch a lot of players and some, they don’t ever give up, even if they are losing, you can tell there’s something about them that doesn’t show they have been defeated. And he was one of those people.”
As her love of making music began to take hold however, in her last year of high school Maidza had to drop her tennis commitments and chose to focus her energy on her artistic pursuits.
That was only four years ago.
Today Maidza performs to crowds in the thousands around the world. She’s played at huge music festivals like Splendour in the Grass, SXSW in Austin, St Jerome’s Laneway Festival, Groovin the Moo, Meredith, and SouthBound, collaborated with well known artists like Killer Mike, Martin Solveig and Troye Sivan, and supported Rita Ora, Illy, and Charli XCX.
“It’s really crazy how quick it has happened, especially when you watch other acts,” Maidza said.
“You think they should be much bigger than they are, and I never understood that for ages, but you understand that it’s not that often that things like this happen.”
Her phenomenal rise in the music industry within the space of just a few years is an astounding achievement, however Maidza hasn’t forgotten her tennis roots. They have actually inspired her.
The ‘Tkay’ album features a track called ‘Tennies’, an ode to her favourite shoes.
“It’s about when you put on your tennis shoes, no-one can mess with you,” Maidza said.
The work ethic and mental toughness instilled in Maidza throughout her tennis years have also carried over to her music career.
“I think it has definitely helped, even when I first started,” Maidza said.
“I would send in lots of demos and they’d only like one, and not the other ten. You have to get over it, you have to move on.
“That’s a big part of tennis, you have to keep moving on, you can’t dwell on something being bad, or you’ll get stuck.”
Touring across Australia over the coming months before festival season kicks in again keeps Maidza pretty busy these days. Though she still plays every now and then, sometimes with her 10-year-old brother, sometimes on tour with her mates (like Maritn Solveig).
With players on the ATP and WTA tours oft seen donning headphones upon entering the court before matches, it’s no stretch to think that the world’s top players, including Maidza’s idols, could soon be blasting ‘Tennies’ to get in the zone. And wouldn’t that be perfect? Because who better to write a tennis anthem than a former tennis ace.
“Yeh that’d be pretty cool, that would be awesome.”