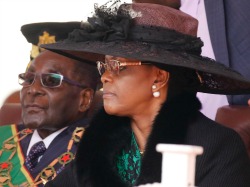 I MUST say from the onset that these tips have stood the test of time. They work. Someone has used them for the past thirty six years and they have never disappointed. But if you come from countries such as South Africa or Botswana or the EU bloc you may wonder (justifiably so) how on earth anyone could wish to rule for life. Well, it’s called the post-colony, a country in Southern Africa called Zimbabwe, where nothing is impossible.
Tip number one: All you need is to get in, sneak in through the backdoor, smash the window or anything. What matters is getting in. Once you are in- oh- you may as well slaughter and throw a party. Call it 1980-the independence celebrations. The mood is good, beer is plenty, Ian Smith is gone and the dissidents are dead. Oh what a time for a celebration! The songs are filled with optimism. Father rule Zimbabwe. People are united. People are one. You even think of making it a one party state. Yes you can! Everyone is right under your spell. In your speeches, you keep saying the people come first but you know for certain that you are the people- you come first.
Some people think this is burdensome. It is not. It’s not like you walk around with a whole country on your back. This idea of ruling for life has its perks, you know: Your wife (forty years younger than you) can go shopping anywhere in the world. No hustles. Your children can study anywhere in the world. Not even the sky can limit them. You fly to Singapore every month for check-ups. You live long-92 to be exact.
Some people miss the point. They want to over-think this thing. Just rule for life. Forget about those vendors littering the streets or those villagers eating berries for supper in Mberengwa. For God’s sake, this is Africa, you won’t end poverty. Nkrumah failed. Nyerere failed. Even Jesus Christ said the poor will always be among you, so why try to end poverty?
Like I said, this philosophy has its own perks.  The good thing is that you don’t have to carry any burdens. Everything begins and ends with you-the Alpha and Omega. No stress. All you do is dress well, practice how to make killer speeches. Make your colleague look useless. You are the man. Dine at state house (with a harem of waiters and waitresses), sleep in parliament (if the proceedings take too long) and order your colleagues to pass one or two draconian laws such as the Access to Information and Protection of Privacy Act, just in case some stupid critizen wants to find out where your wife shops or where your children study-things like that.Advertisement