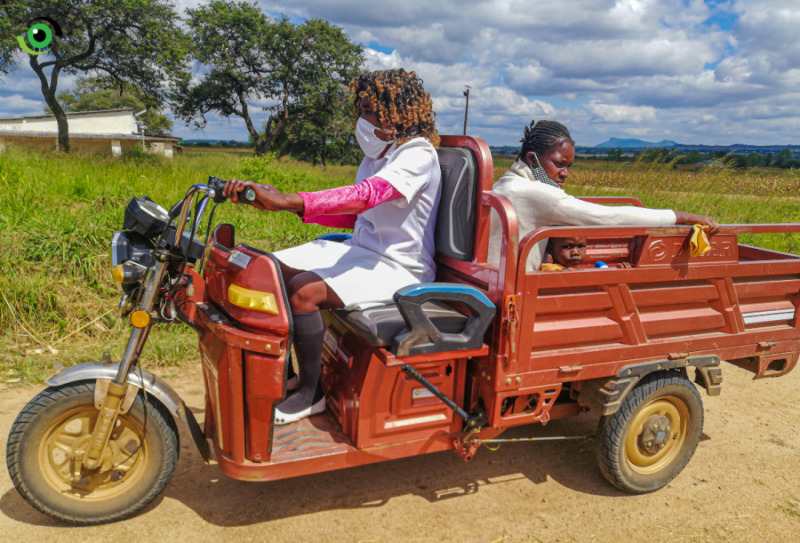 IN ZANA 3, Wedza District, 131 kilometres south of Harare, the capital of Zimbabwe, Talent Zindi, 21, a subsistence farmer, is inspecting the ear flowers of a maize plant in her field.

She will be harvesting her maize crop in two weeks. Zindi says the harvest season reminds her of the stress that she went through in March 2019 trying to get transportation to Igava Clinic, 14 kilometres away from her home to deliver her baby.

Luckily, back then, Zindi’s friend introduced her to Mobility for Africa, an NGO that offers electric tricycles, known locally as Hambas, to people in Wedza.

“That day I called Mobility for Africa and they picked me from home to the clinic where I delivered my baby. After delivering they ferried me there for checkups,” Zindi says, while holding her 23-month-old baby, Junior Mhuka.

Zimbabwe is experiencing its worst economic crisis in decades with a three-figure inflation rate leading to an increase in the cost of living. Health facilities in rural areas are inadequate while those available are understaffed and have no ambulances to ferry pregnant women and mothers with newborns from their homes to clinics.

Those clinics that have ambulances are unable to use them because of fuel shortage. Petrol is currently trading at 147 Zimbabwean dollar ($1.34) while diesel is trading at Z$145 ($1.32) which is beyond the reach of many in Zimbabwe. The roads are also rough thus making them hard to navigate in the case of an emergency.

The inadequate health facilities and transport challenges in rural Zimbabwe contribute to the high maternal mortality rates, which the Zimbabwe Demographic and Health Survey estimates at 651 deaths per 100,000 live births. The United Nations Population Fund describes Zimbabwe’s rate as “unacceptably high”, even as the last five to 10 years show a decline.

To reduce the maternal mortality rates in the country, the government has established Maternity Waiting Homes that provide a setting where high-risk women and those staying far from the hospital can be accommodated during the final weeks of their pregnancy, near a hospital with essential obstetric and neonatal care facilities.

Health experts believe poor quality of care remains a key issue. “Some of the quality care issues are related to poor attitude by health personnel. There is, therefore, a need to increase focus on quality of care in the provision of maternal health services,” says Itai Rusike, executive director, Community Working Group on Health.

In the 2021 budget, Finance Minister Mthuli Ncube allocated 12.74% of the national budget to the health sector, an increase from 10% allocated in 2020.

The 2021 health sector allocation is below the threshold set by the Abuja Declaration, that requires African Union member states to allocate at least 15% of their annual budgets to improve the health sector.

Despite this increase, the health sector has remained crippled due to the current economic crisis and a weak currency. Covid-19 has worsened the situation and the maternity health sector has not been spared either.

In rural Zimbabwe, many women like Zindi who could not afford to hire cars to take them to the clinic, walk up to 30 kilometres to get to the nearest clinic despite being pregnant. Others are transported in wheelbarrows and scotch carts to clinics.

A primary care nurse at Igava Clinic, Tabeth Chidemi, says lack of transport to reach health facilities pushes some women to opt to deliver at home. “Lack of transport coupled with the impact of Covid-19 has led to the rise of home delivery cases,” she says.

A village health worker, Olinda Ruhukwa, says women were giving birth while on their way to the clinic. “The majority could not afford to hire transport for such a long distance to the clinic. This was a setback to our efforts to improve maternal health services here,” she says.

“If it was not for the Hambas, I would have walked to the clinic. After delivery I was expected to also walk there for checkups with the baby strapped on my back,” says Zindi, whose family’s monthly income is a paltry Z$3300 ($30).

Another pregnant woman from Wedza District, Fadzai Matina, says her husband’s paltry salary of Z$2750 ($25) a month is not enough to hire transport services to ferry her to the clinic. “The Hambas are easing my transport woes to the clinic. They ferried me to the clinic free of charge since I was pregnant until delivery,” she says.

Hamba, a name that translates as “go” in English was introduced in Wedza in February 2019 by Mobility for Africa to overcome one of the biggest development obstacles in Africa — mobility. They achieved this by bringing the electric vehicle revolution to rural women, through sustainable transport solutions using green energy supply.

The Hamba is a three-wheel tricycle that runs on a lithium battery that is charged using renewable energy and can be easily driven by rural women. Its batteries take an average of six hours to charge and the Hamba can go approximately 50 km per charge. From the villages to Igava clinic, which is 14 kilometers away, the Hamba can go for three trips varying with the speed and load.

The Hamba can easily navigate through the rugged stretches of Wedza roads. The e-tricycle is low lying which makes it easy for pregnant women to get on and off. For newborns, the tricycles are not closed, and the mother will have to cover the baby from blowing wind using a towel. Even though it is difficult for women to give birth while on-aboard the Hamba, it is viable in transporting them to the nearest health facility.

“The plan is to build a scalable and replicable model to manage a fleet of 100 electric tricycles in a community with one and a half batteries allocated per tricycle, so we have plenty of batteries and a more efficient charging station to manage the fleet,” she says.

“Smaller fleets can also be designed depending on users and services. This would, for example, be part of our plan for health workers as well as other local government providers.”

Bloemen says they are working to expand their operations to other parts of the country with a new site to be launched in June this year in Chipinge, 445 kilometers southeast of Harare.

“Wind can complicate the health of the baby during postnatal care visits. There is also a need for privacy. It is a taboo in our Shona culture for a pregnant woman to be seen by everyone moaning in pain when she is about to deliver,” she says. This is not a barrier to pregnant women being ferried to the clinic.

Chidemi says shortages of tricycle batteries is their biggest challenge at the clinic. “It would be great if we get three to four batteries so that we can always change on our own without having to visit Mobility For Africa centres to have them recharged,” she says.

Simbarashe Tafirenyika, Zimbabwe Urban and Rural Council Nurses Workers’ Union president, believes the use of electric tricycles is improper to convey pregnant women to clinics, but they are critical in alleviating transport problems to those without any complications.

“These electric tricycles can just fill in a gap but in the long-term there should be ambulances in rural areas so that pregnant women can give birth while on board,” he said. “There is a need for the government to channel more funding towards the health sector.”

Emmanuel Mahlangu, president of the Zimbabwe Confederation of Midwives says mobility is critical in reducing maternal and neonatal morbidity and mortality in the country.

“Maternal and neonatal health services are very sensitive and can be life-threatening. The need for emergency obstetric services is an ever-existing reality whenever a woman is pregnant or gives birth,” he says. “Countries such as China had a remarkable reduction in maternal and neonatal morbidity and mortality because they had a sudden boost in the road network, accessible health facilities and automobile to every family unit.”

China implemented a package of nationwide strategies in April 2016, the Five Strategies for Maternal and Newborn Safety (FSMNS). To facilitate the use of the FSMNS, the Chinese government invested ¥8.48 billion ($1.2 billion) on the support of infrastructure construction of maternal and child healthcare institutions nationwide, according to BMJ Global Health journal. The maternal mortality rate in China has since declined by 21.1%, from 23.2 per 100 000 live births in 2013 to 18.3 per 100 000 live births in 2018.

Rusike says the noble health concept stipulates having a clinic within every 10 km in a community. However, Mahlangu is not particular about the form of transportation used as long as speed, safety, comfort and privacy is upheld. “Mobile units that are self-contained maternity units can help in the interim until permanently accessible clinics are built,” Mahlangu says.

To date, Mobility for Africa tricycles have ferried more than 100 pregnant mothers and mothers with newborns to various clinics in Wedza.

Zindi, who is now eight months pregnant with her second child, is not worried about transport to Igava clinic.

“They have been ferrying me to the clinic for checkups since the day I discovered I was pregnant and they promised to ferry me until delivery,” she says, adding that she is enjoying how Mobility for Africa tricycles are saving pregnant mothers and newborns in Wedza.