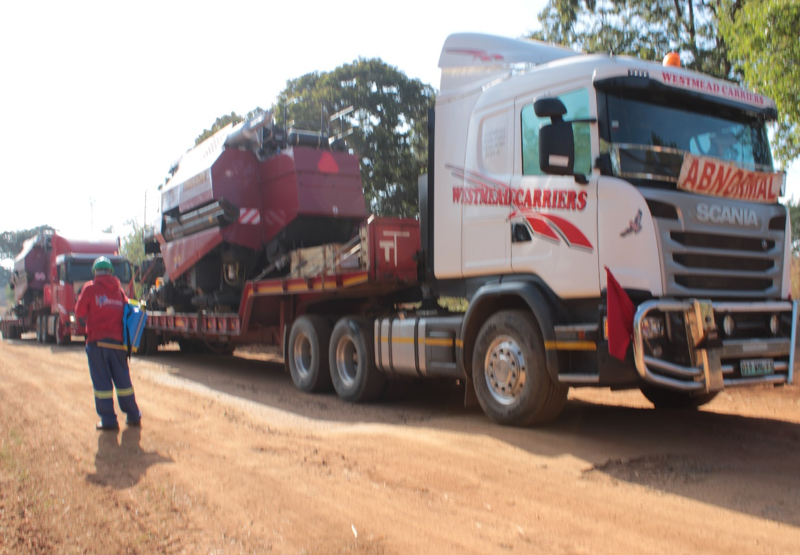 Farming equipment from Belarus arrives in Zimbabwe
Spread This News

AS I write this a huge load of farm machinery is lurching across the Indian Ocean in the bowels of a transport ship bringing with it a supreme irony.

The shipment is part of a plan by a far off country, on the road to Russia, bent on teaching Zimbabwe – a country that could once teach the world – how to farm.

In a $58 million deal six grain harvesters, 100 tractors, 16 seed drills, five fifth wheel trucks, five semi-trailers are on their way from the former Soviet state of Belarus to the ports of Beira in Mozambique and Durban in South Africa.

The shipment is expected by the end of July. Fourteen grain harvesters and 36 units of seed drills are already in Harare. Ships will bring another 20 grain harvester, 340 tractors and 138 seed drills to Zimbabwe by December 2020.

The idea is being nurtured by the consul general for Zimbabwe in Belarus Alexander Zingman. He is the head of AFTRADE DMCC and spends much time travelling between Zimbabwe and the country of his birth.

The project is being financed through the Development Bank of Belarus supported by The Eastern and Southern African Trade and Development Bank. The export credit facility has been provided on a long-term basis with competitive interest rates.

“The aim is to totally mechanize agriculture in Zimbabwe using a comprehensive set of machinery – tractors, planters, harvesters and trucks – to cultivate and harvest maize and wheat. This will prevent the harvest losses that Zimbabwe normally faces.

“It will boost Zimbabwe’s food security and save the country valuable foreign currency. We will train each farmer who uses this modern equipment. More than 1,000 farmers will get special training courses in Zimbabwe. 10 specialists from Zimbabwe will also be sent to Belarus for two months for training at our manufacturing plants, “he says.

Ten trainers from Belarus are also in Harare, with five more on the way, in a year of training of farmers in Zimbabwe that is hoped will kick start a struggling industry that was once the pride of Africa.

The irony is that 30 years ago such a programme would have been looked upon as an agricultural equivalent of teaching your grandmother to suck eggs. In the 1980s and for most of the 90s Zimbabwe was the breadbasket of Africa with a small, efficient, band of mostly white farmers who fed Southern African and exported food to Europe.

It couldn’t last amid the lack of a clear plan for organised land reform and growing political pressure.
When the farm invasions were unleashed by the people in power in 2000, it led to bloodshed and random confiscation that reaped a bitter harvest of lost production and exports that persists until this day.

That year with all of its fumbling fury fuelled with the idea that to get rich you merely had to own a farm, is always seen as a turning point for the industry. It created a large slice of the country’s GDP and as it fell, so did the fortunes of Zimbabwe.

The World Bank Zimbabwe production figures for maize – that used to feed the region – tell the story. In 1996 Zimbabwe was growing more than 2.5 million mt of maize; by 2016 that figure had dropped to a mere 500,000 mt of maize.
A further sign of lean times, according the World Bank, is that the fertilizer industry was at 75% capacity before 2000 and as low as 30% now. In the halcyon days of 1996, many Zimbabweans would have been incredulous at the idea of trainers and combine harvesters making their way half round the world to teach them farming. In difficult times for the Zimbabwe and its economy almost anything is worth a try.