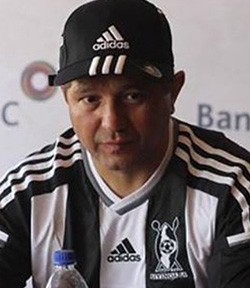 HIGHLANDERS coach Erol Akbay is in buoyant mood ahead of their clash against bogey side Harare City at Barbourfields Stadium on Sunday.
Akbay has declared that he will force the Sunshine City Boys to play their game when they clash in the Castle Lager Premier Soccer League tie.
“I have not seen Harare City playing but from what I have gathered they are a very good side,” Akbay told NewZimbabwe.com on Thursday.
“I will see them when on Sunday and will employ the tactics based on what I see. But one thing for sure is that we will force them to play our game.
“It might not work at times but that’s what we always do to force opponents to play our game.”
Highlanders are sitting pretty in second position on the league table with thirteen points behind leaders FC Platinum on 16 points in six matches of the campaign.
Harare giants Caps United, who face Sunday Chidzambwa’s ZPC Kariba on Saturday, have the same number of points as Bosso but are in third place because of an inferior goal difference.
Highlanders though, have had difficulties against Harare City after they drew 1-1 in May last year before the Sunshine City Boys triumphed 1-0 in the reverse fixture.
Bosso are coming from a morale boosting 4-1 win against Ngezi Platinum with teenager Prince Dube scoring a brace while Eric Mudzingwa and Rahman Kutsanzira weighed in with a goal each as the Dutchman recorded his biggest victory since he took over.
Akbay has warned Bosso supporters that the season was still in its infancy, adding they needed to be realistic with their targets.
“We still have 24 games to play and our supporters have to wait and remain humble.
“The season is still very long but it’s good that supporters want something and we must give it to them but also remain realistic,” said Akbay.
The Dutchman however, said Bosso were a big club and they had to fight to win bigger things.
“We have to win every match because we are Highlanders. Highlanders is a big team and must play for nothing but the championship,” said Akbay.