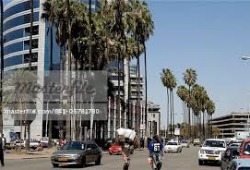 The Harare city council lost thousands of dollars in car parking  revenue on  Friday after 200 EasiPark employees downed tools over ‘unlawful’ scraping of a commission they get on top of their monthly salaries from the local authority.
EasiPark, a joint venture between Easihold of Zimbabwe and the Harare City Council, controls car parking bays in the city centre while the City Park , wholly owned by the Harare city council, takes charge of parking bays in the peripheries of the city.
Motorists pay a parking fee of $1 per hour in the city centre and $0.50 in the parking bays outside the city.
EasiPark workers, Friday morning, swarmed the company’s headquarters along Julius Nyerere way demanding that the management should address them.
They also accused the management of rebelling against government by directing them (workers) to reject bonded coins from motorists.
Bonded coins were introduced last year by the Reserve Bank of Zimbabwe as a counter measure to the change problem customers and shop owners were facing.
The workers committee secretary Tongai Mandere told NewZimbabwe.com that the management should explain to them the reasons for slashing their commission.
According to Mandere workers get a salary of $290 per month and get 10% commission on every dollar cashed in.
“We were told this week by the Human Resources that the 10% commission we were getting has been cut .They did this without consulting us and that is one of the reasons we are here,” he said.
“The management is also ordering cashiers to reject bonded coins from motorists. They are also saying that we should charge government vehicles which would have parked in our parking zones”.
The workers also accused the management of unlawfully suspending their workers committee.
The fifteen member workers committee was suspended Thursday for inciting workers to down tools.
City Park General Manager Simon Muzviyo who was seconded to EasiPark last September dismissed the allegations the workers were levelling against him.
He said the Marshals were resisting a new parking system which they introduced last week.
“On the 13 of January we abandoned the manual ticketing system we were using after realizing that it was subjected to manipulation and introduced an effective and traceable electronic system. This did not go down well with the workers who we suspect were benefiting from the manual system. The new system has a full proof and cannot be manipulated.Advertisement

“I am saying this because on Tuesday when we introduced the system the cashiers resisted and threatened to down tools and that’s when all this started,” he told NewZimbabwe.com in an interview.
Muzviyo admitted that they had suspended the workers committee “for us to deal with individual workers without their interference”.
He however refuted allegations that he was refusing bonded coins saying that they were banking hundreds of dollars worth of them every day.
According to City Park boss an individual Easipark Marshal operating in the central business district cashes in $400-$600 per month as compared with their Harare City park colleagues manning parking bays located in the peripheries of the city who bring in at least $1 400 per month.