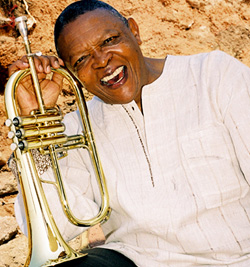 SOUTH AFRICAN legendary jazz musician Dr Hugh Masekela was awarded an Honorary Doctorate in Music from Wits University.
Masekela received an Hononary Doctorate degree in April, from the University of KwaZulu-Natal (UKZN), for his contribution in music and for his talent as a world class musician.
Bra Hugh as he’s fondly known by his fans began singing and playing piano as a child.
He made his music debut in the late 50s as an Afro-Jazz singer, and he has since managed to remain relevant in the music industry.
The Stimela hitmaker has for many generations inspired young musicians, both locally and abroad.
Masekela is a trumpeter, flugelhornist, cornetist and music composer.
He has collaborated with some of Mzansi’s young talents, from the likes of Thandiswa Mazwai and Micasa’s front man J’ Something .
The 78-year-old’s graduation ceremony was held at Wits Auditorium, earlier today.
The University made the official announcement on Twitter: “This morning Wits will award an honorary doctorate degree to Hugh Masekela.”
Advertisement