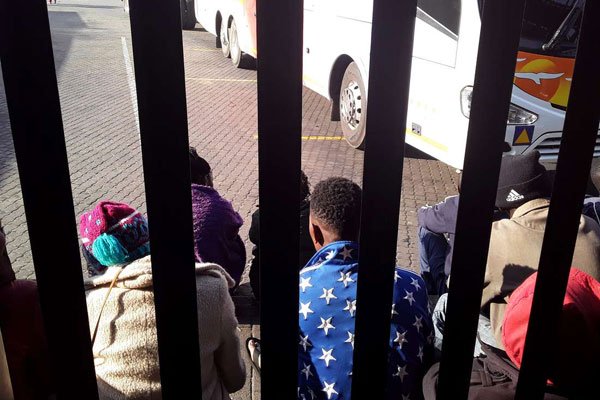 Migrants at Beitbridge in Zimbabwe at the border with South Africa. Human traffickers are dumping illegal immigrants destined for South Africa in Zimbabwe, as they find it difficult to circumvent tightened border controls owing to Covid-19 lockdowns
Spread This News

FRUSTRATED by lockdowns imposed by countries to slow down the spread of coronavirus, human traffickers are dumping illegal immigrants destined for South Africa in Zimbabwe at a time the southern African country is battling to bring the pandemic under control.

Zimbabwe, a transit country for immigrants from countries such as the Democratic Republic of Congo, Uganda, Malawi, and the Horn of Africa region, is already overwhelmed by the number of its nationals returning from neighbouring countries where they had sought economic refugee before the outbreak of Covid-19.

The International Organisation for Migration (IOM) this week said it had assisted 100 stranded Malawian immigrants return home. The situation had reached crisis levels, it added.

Some of the rescued immigrants were abandoned by human traffickers that found it difficult to circumvent South Africa’s tightened border controls.

IOM said due to lack of Covid-19 quarantine facilities in Zimbabwe, when apprehended by law enforcement agents, undocumented immigrants often ended up in prisons where they are exposed to coronavirus.

Mario Lito Malanca, the IOM Zimbabwe chief of mission, last Wednesday told The EastAfrican that in addition to the 100 Malawians, his organisation was in the process of helping 27 Ethiopians stranded in the southern African country return home.

They include 12 Ethiopians immigrants that were found stranded at a Zimbabwean village near the South African border late in March after they were dumped by human traffickers.

The immigrants could not cross into South Africa after both countries closed their borders to stop the spread of coronavirus.

“Zimbabwe has been a transit country for migrants from Malawi and the Horn of Africa heading to South Africa to find work and other economic opportunities,” IOM said.

“These irregular migrants were apprehended by the Zimbabwean law enforcement authorities and were detained for unlawful entry into the country.”

The dumped immigrants either hand over themselves to the authorities or find their way back home through Zimbabwe’s porous borders. IOM said some of the Malawians abandoned by traffickers in Zimbabwe had found their way back home despite border restrictions to contain the spread of coronavirus imposed on March 30.

“Some migrants were abandoned in Zimbabwe by smugglers and traffickers and remained in the country illegally, while others decided to return to Malawi after realising the restrictive measures imposed by the governments of both Zimbabwe and South Africa that impede their migratory process to their final destination,” IOM added.

“Migrants going through Zimbabwe to South Africa are affected by a range of human smuggling and serious human rights violations including sexual abuse, torture, exploitation, neglect and even death.”

The repatriated Malawians were tested for coronavirus at the border with Zimbabwe and those with Covid-19 symptoms were referred to a health facility for treatment.

They will only be released after they recover from the disease.

Last month, three Malawians that were held at an isolation centre in the southern city of Masvingo after they were caught trying to cross into South Africa, tested positive for coronavirus.

At the onset of the Covid-19 outbreak, South Africa started the construction of a new fence on its border with Zimbabwe to “stop cross border infections.”