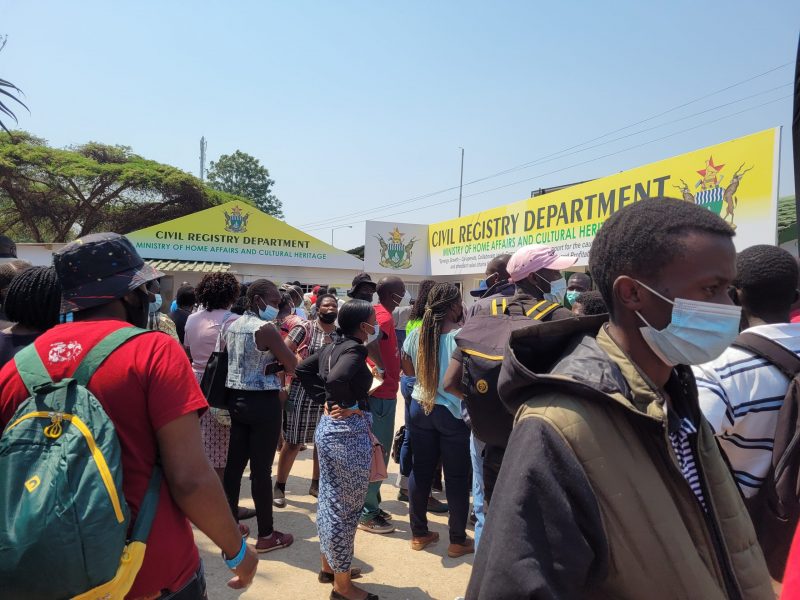 Desperate Harare residents waiting patiently to acquire new IDs at the Harare Agricultural Show Friday. However, only a few managed get the documents
Spread This News

HUNDREDS of citizens seeking to replace lost national identities Friday besieged, most without success, the Civil Registry Department stand at the Harare Agricultural Show to secure the papers.

Desperate Harare residents queued for hours under the scorching October sun to acquire their identity papers violating Covid-19 regulation on social distancing and masking up.

However, a visit by NewZimbabwe.com to the Civil Registry Department stand revealed only a few people managed to acquire the IDs as officials claimed they were facing network connectivity challenges.

A  message started circulating on various social media platforms urging citizens with lost IDs to attend the agricultural show and get a replacement.

Only citizens with lost IDs were being allowed to seek a replacement.

One Harare resident who had lost patience regretted wasting time and money to visit the registrar general’s stand Friday.

“I  received a message on WhatsApp indicating people seeking to replace their national IDs to visit the Harare Agricultural  Show. I also heard the message on the radio this morning, but unfortunately, I have failed to replace the ID I lost six months ago,” he said.

In June this year, the challenge to acquire documents reached its peak after the government set aside a weekend for students writing their final Zimbabwe Schools Examination Council (ZIMSEC) examinations this year.

However, lack of adequate staff at the registry offices and a shortage of processing material stalled the process in most provinces leaving thousands of students stranded, and forcing the government to suspend the process.

The government said the decision to suspend the process was a precautionary measure considering rising Covid-19 cases.

“The programme was meant for ‘O’ and ‘A’ Level students who want to register for their exams only,” Kazembe Kazembe, the Home Affairs Minister, said.

“It turned out that all youths who need IDs came, even some who are not even in school. This becomes a problem with this Covid-19 pandemic, hence the programme will be called off in view of the risks involved.”

In its recent report on acquiring documentation in Zimbabwe (We are like Stray Animals), Amnesty International said there are over 300 000 people who are in danger of being rendered stateless as they do not have IDs.

The report indicated those without documentation are poor, marginalised, discriminated against, disenfranchised, and politically excluded.