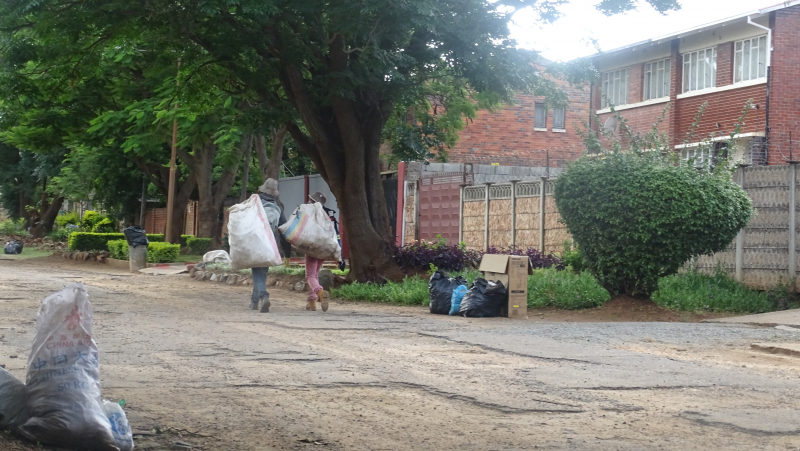 SCAVENGING bunches have invaded some low density suburbs in Bulawayo where they are searching any recycling materials in waste bins awaiting collection by the city council’s refuse collection trucks.

As early as 5 am every Thursday, Lameck Ncube (26) moves from one house to house in Paddonhurst’s Hayton street filling his sacks with pieces of plastic for recycling.

“To me, anything which can be recycled is gold. I have got a dairy of refuse collection days for all the northern suburbs. I wake up very early every day because the business is now very competitive,” Ncube told NewZimbabwe.com in a recent interview.

After collecting the used plastic containers, Ncube and his syndicate ferry their collection to a central place located on an open space along Samuel Parirenyatwa road in the close to the city centre.

“Every Monday, a company with recycling facilities in Belmont comes to buy the plastics. They pay US$5 for a 70kg of the containers. For one to make a decent earning, they need to collect as much plastic as they can. It is quite a cumbersome job, but at the end of the day I need to put food on the table,” said another plastic scavenger who asked not to be named.

The city’s sanitary lanes and open spaces have also become favorite hunting grounds for the scavengers who at times have been involved in bloody rubbish scavenging wars with rival gangs.

“Scavengers in the Southern region should confine their activities there. We cannot allow someone from Hillside to come to Paddonhurst to scavenge garbage here. This area is our territory and we will not allow anybody here,” said a scavenger who only identified himself as Moyo.

For the past week, the scavengers have been smiling all the way to the bank because the city council has not been collecting rubbish because council workers are on strike.

Due to the failure to collect refuse, heaps of garbage have been mounting in open spaces as residents and businesses resort to dumping solid waste in undesignated areas posing a health hazard, particularly in the light of Covid-19.

However, the scavengers have invaded the new dumpsites looking for any material suitable for recycling.