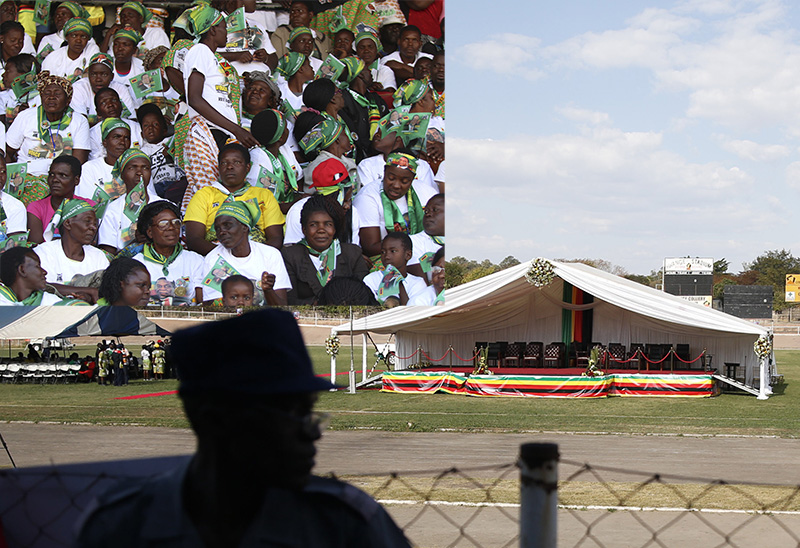 HWANGE: Ruling ZANU PF said Wednesday they were not impressed after President Emmerson Mnangagwa failed to turn up for a scheduled rally, having patiently waited for him all day.

The development comes after a rally Mnangagwa addressed in Bulawayo last Saturday was rocked by a still to be explained explosion which injured 49 people including his two deputies.

Two of those injured in the blast have since died.

They started trickling into the venue as early as 0800hrs as trucks and buses including smaller vehicles took turns to ferry supporters to the venue.

Once inside the venue the supporters patiently waited for their leader who is also Zanu PF presidential candidate in the upcoming harmonised elections, as they were entertained by Sandra Ndebele and Alick Macheso.

Mnangagwa was expected to address around 1400hrs, after officiating at a ground-breaking ceremony at Hwange Power Station.

And there was ululation and whistling when a helicopter flew past the stadium as the crowd thought Mnangagwa had finally turned up.

But he never did.

Zanu PF Matabeleland North provincial chairman Richard Moyo later told the supporters: “Our President was supposed to be here, but something came up.

“He knows that you have been waiting for him, but he has a pressing commitment that he has to attend to.

“This was not a provincial rally but a district one; the one for the province will be there in Lupane soon.”

Moyo told the crowd that packed lunch would be provided for them but scores immediately left the stadium.

Those who spoke to NewZimbabwe.com expressed displeasure.

“He should, at least, have come even briefly just to greet us. We would have appreciated that because all we wanted was to see him,” said one supporter.

Another said: “When we saw a helicopter flying past we were convinced that he was now coming but we were shocked when the chairman told us that he is not coming.”

Even Politburo members Simon Khaya Moyo, Obert Mpofu, Cain Mathema and Patrick Chinamasa who accompanied Mnangagwa at the ground-breaking ceremony didn’t pitch up at the stadium.

Angeline Masuku who is Bulawayo Minister of State, was the only Politburo member who visited the stadium.