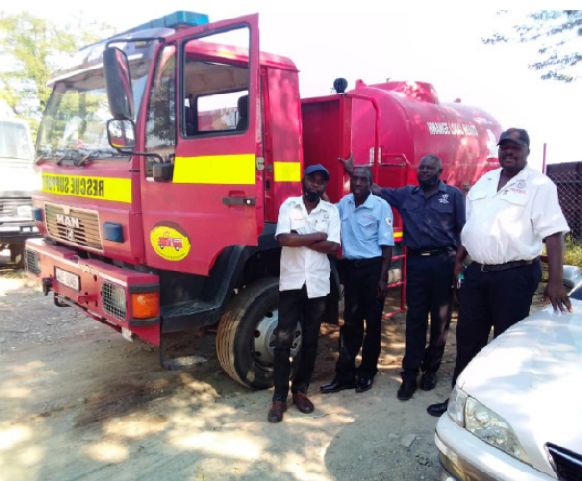 HWANGE Local Board (HLB)’s fire and rescue section successfully carried out a six-day training course aimed at equipping Sino Hydro workers with requisite skills to avert accidents within their workstations.

According to HLB team leader, fire fighter Shonipai Muleya, the course was aimed at equipping Sino Hydro’s construction employees with essential rescue and lifesaving skills in the event of work-related accidents.

“We trained them on rescue skills at high rise construction buildings. Generally, we were equipping them on how to rescue themselves when there are accidents and to be aware of certain hazards that might befall them at their workplaces,” he said.

The training comes after a Chinese employee in one company fell some 30 metres to the ground at Hwange Power Station’s construction site.

The expatriate later died upon admission at Hwange Colliery hospital.

Sino Hydro is carrying out Hwange Power Station’s expansion project, which will see 600 megawatts added to the national grid.

Apart from attending to various accident and emergency scenes in Hwange District, HLB’s fire and rescue section has also carried out awareness campaigns.

“We occasionally do awareness campaigns throughout Hwange as well as carry out fire inspection of premises for companies. We don’t only look at rescue services but fire prevention as well,” said Muleya.

HLB chairman Nqobile Ocean Mabhena said the local authority’s fire and rescue team was highly skilled as its members have been receiving specialised training from a reputable organisation from the United Kingdom (UK) since 2015.

However, last year, the training, which is held annually in Bulawayo did not take place due to the Covid-19 outbreak.

“The training that our team offered Sino Hydo (employees) is basically more of the same training we send them to take part it in,” he said.

Bulawayo every year, through a partnership, we have with a foreign organisation called Operation Florian.

“The organisation is based in the UK and has been coming to impart knowledge to our emergency and response team,”

“We expect them to spread that knowledge through training other organisations such as Sino Hydro,” said Cllr Mabhena.

Operation Florian is a charity organisation that assists fire, rescue and ambulance services throughout the world.

Mabhena called on other companies especially mines in Hwange to undergo the training course so as to ensure the safety of their workforce and operations.

“We hope other organisations such as mines can come forward and undertake this training.

“It’s unfortunate we don’t have adequate equipment to offer fully-fledged training but if any of the companies in need of training can provide, that would be a plus,” he said.

“Our team are highly skilled and are also members of the CPU and are also trained to carry out rescue services during floods,” said Mabhena.

“The trainings also assist council in terms of revenue generation because they aren’t offered for free.

“Organisations have to pay but for institutions like schools, churches and other charitable organisations, it’s for free and this entails fire awareness programmes,” said Mabhena.

Operation Florian has offered to donate a fire engine to the local authority.

About US$15 000 is needed to ship the fire engine and supporting ancillary equipment into the country.

“We are in the process of raising funds and also in talks with government to have the equipment coming through our borders free of duty.

“We are quite aware that other councils have been doing the same and exempted from paying duty,” said Mabhena.