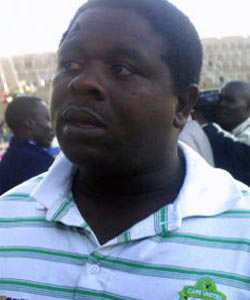 LEADERS Dynamos have a tricky assignment away to Hwange on Wednesday as the Premier League title race enters the home stretch.
The defending champions lead Harare City by two points with Highlanders four points adrift and FC Platinum a further point behind with nine matches left before the curtain comes down on the season.
Dynamos are unbeaten in five matches since their defeat to How Mine on July 6 but they face a Hwange side battling for its Premier League survival.
With Dynamos on the road, Harare City have an opportunity to solidify their title challenge when they host BancABC Sup8r Cup winners Shabanie Mine at Rufaro.
But the pick of Wednesday’s fixtures is the clash between Highlanders and ambitious FC Platinum at Barbourfields.

Both teams know defeat could deliver a mortal blow to their title ambitions and will go all out to keep Dynamost honest ahead.
CAPS United, in fifth and six points off pace, can keep their season aline with victory over Triangle at the National Sports Stadium.
Triangle are no push-overs, and their narrow 3-2 defeat to Highlanders in the Mbada Diamonds Cup first round on Sunday proved they have a lot of goals in them.
Their coach Gishon Ntini said: “I respect CAPS United because that is where I was born and bred as a football coach. They are like a family to me and one day we might be re-united.
“But let me stress that they should not expect any favours from me because I am here at Triangle to do a job, which is to win games.
“We lost our last match to Highlanders in the Mbada Cup but that was a different competition altogether. I feel that staying in the league is more important than losing out in a cup competition because it will guarantee you participation in more cup games again next year.”
Castle Lager Premier Soccer League Fixtures
Wednesday: Harare City v Shabanie (Rufaro), Motor Action v Chicken Inn (Motor Action), Buffaloes v How Mine (Sakubva), CAPS United v Triangle (National Sports Stadium), Hwange v Dynamos (Colliery SS9),  Highlanders v FC Platinum (Barbourfields)
Thursday: Monomotapa v Tripple B (Gwanzura)