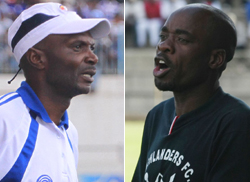 Hwange 4-2 Dynamos; Harare City 1-1 Shabanie Mine; Highlanders 2-1 FC Platinum
PREMIER League leaders Dynamos choked at the Colliery against a battling Hwange on Wednesday as Highlanders closed the gap to just one point.
Harare City, starting the day two points behind and second in the league table, could have climbed over Dynamos with a win but they drew 1-1 with Shabanie Mine at Rufaro.
Highlanders were the biggest beneficiaries of the stumble by the leading pair as Njabulo Ncube scored twice at Barbourfields on their way to a 2-1 victory over visiting FC Platinum.
The Bulawayo club and Harare City are tied on 40 points but the Bulawayo club enjoys a better goal difference.
Both teams are within striking distance of Dynamos who are only a point up the table on 41, with eight matches to play this season.
Hwange were ahead after 32 minutes when a trip on Gilbert Zulu by Dynamos defender Victor Kamhuka inside the box led to a penalty. Gerald Ndlovu dispatched the spot kick.
Hwange doubled their lead just four minutes later when Nkosana Siwela’s left foot shot whizzed past George Chigova.
Dynamos rallied back and reduced the arrears shortly after the break when Oscar Mushure’s freekick from the edge of the box sailed past Takabva Mawaya’s despairing gloves.
But the comeback was short-lived as Hwange re-established their two-goal cushion moments later with a fine Zulu header from Eric Chipeta’s corner.
Dynamos dug deep again and closed the deficit on 58 minutes when Mushusre scored from another free-kick, but this time he owed much of his success to a deflection which deceived the young Mawaya.
Callisto Pasuwa threw in Clive Kawinga and Patrick Khumbula as Dynamos sought to pile the pressure on the coal-miners, but Hwange applied the coup de grace with a 77th minute goal as Zulu grabbed his second with a glancing header.
At Barbourfields, veteran striker Njabulo Ncube scored a goal in each half as Highlanders prevailed over Lloyd Mutasa’s FC Platinum.
Platinum skipper Daniel Veremu gifted Kelvin Kaindu’s men the opener on 20 minutes when he miscued a clearance allowing Ncube to race clear and beat a badly-exposed Francis Tizayi.
Ncube would again capitalise on poor Platinum defending when he beat an offside trap to control Eric Mudzingwa’s pass before finding the mark past Tizayi.Advertisement

In truth, Platinum were dominant but they threw away several chances to score and with the defeat they may have surrendered their title challenge as they slid to fifth in the table, five points off the pace with eight matches to play.
At Rufaro, Harare City went ahead five minutes into the match when midfielder Nathan Ziwini finished a cross from Silas Songani.
But Shabanie drew level shortly after the break through a Pervington Zimunya header off a Tarisai Rukanda cross.
At the National Sports Stadium, Triangle threw a spanner in the works after staging a dramatic come back to draw 1-1 against CAPS United.
The draw was still enough to lift United over Platinum into fourth on goal difference, with both teams on 36 points.
Hardlife Zvirekwi had put United in the lead on 18 minutes with a low shot from near the penalty area to beat goalkeeper Rayners Ashley.
But United, who finished the match with 10 men after Takudzwa Mahori was given a red card by referee Norman Matemera for a crude challenge on Charles Makoto in the second half, finally yielded to pressure on 83 minutes with substitute Richard Kawondera grabbing the equaliser from an acute angle.
Castle Lager Premier Soccer League Results
Wednesday: Hwange 4-2 Dynamos; Harare City 1-1 Shabanie Mine; Highlanders 2-1 FC Platinum, CAPS United 1-1 Triangle; Buffaloes 1-1 How Mine; Motor Action 0-0 Chicken Inn
Thursday: Monomotapa v Tripple B (Gwanzura)