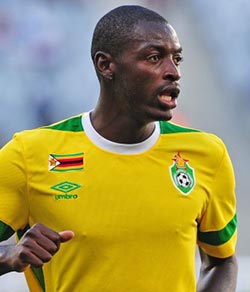 Hwange 1-0 Dynamos
HWANGE returned to the summit of the Castle Lager Premiership with a stunning 1-0 win over Dynamos on Sunday.
The coalminers were awarded a penalty in the 36th minute when Ocean Mushure handled in the box under pressure from Evans Rusike, but the Dynamos players protested heavily against referee Mandlenkosi Sibanda’s decision.
When calm was restored new Chippa United signing Eric Chipeta, the pillar upon which Hwange’s solid start to the season has been built, stepped up to blast the ball past second choice Dynamos goalkeeper Artwell Mukandi.
Dynamos coach Callisto Pasuwa benched regular George Chigova, who is understood to have pulled a muscle.
The colliery has not been a happy hunting ground for Dynamos in the last two seasons as they lost 4-2 last year and on Sunday they went in with a bit of an attitude.
Dynamos allege they were denied enough warn up before the match, and team manager Richard Chihoro, from images before the game, seemed to be exchanging words with one of the Hwange players in the centre of the pitch.
Incidents of juju use are common in local football.
When proceedings got underway, Hwange went in search of the opener but found the Dynamos defence resolute, until the decisive moment when Mushure handled inside the box.
Dynamos’ Achilles heel has been the strike-force. Even when Anesu Gondo was brought in for the misfiring Simba Sithole early in the second half there was no change in their fortunes. Seven minutes of the referee’s optional time also yielded no goal for the defending champions.
This was Dynamos’ fourth loss of the season – and the fourth they have lost by one nil scorelines. They have won four times and drawn thrice leaving them in fifth position with 19 points, three away from Hwange.
Sunday’s result was not the perfect preparation they needed ahead of Sunday’s big clash against Highlanders at the National Sports Stadium and will have to be at their best if they are to inflict the first defeat of the season to the Bulawayo giants.
Results:  Hwange 1-0 Dynamos, Caps United 3-0 Shabanie Mine, Chicken Inn 1-0 Chiredzi, Triangle 1-1 Highlanders, FC Platinum 1-1 Black Rhinos,  ZPC Kariba 1-0 Chapungu, Buffaloes 1-2 How MineAdvertisement