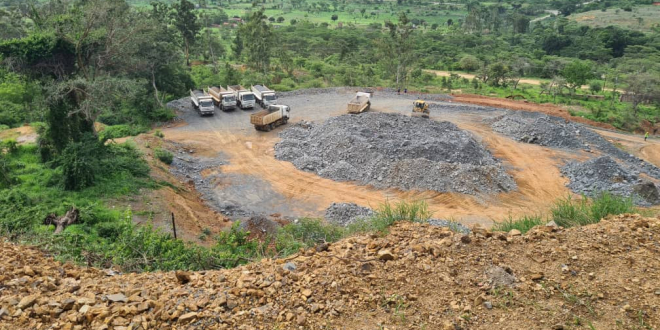 HWANGE: The local community here has petitioned Beifa Investments, a Chinese-owned mining company, exploring for coal in Dinde area to stop forthwith any mining activities as doing so violates the culture and heritage of the Nambya people.

Beifa Investments torched a storm recently when it started exploring for coal in Ward 13, Dinde without consulting villagers.

The villagers fear over 600 families will be displaced if the project continues and have accused local leaders including the traditional leader, Chief Nekatambe and Hwange Rural District Council officials of nicodemously allowing the mine company to continue carrying out the exploration work despite their protests.

They also fear their relatives’ grave graves and sacred shrines will be violated.

The Chinese miners claim they have a special grant from the government although they have not produced it despite several demands for them by the Zimbabwe Lawyers for Human Rights to do so.

The villagers’ petition seen by NewZimbabwe.com and being circulated to gather more people’s signatures reads: “Beifa Investments and Hwange Rural District Council did not carry out proper consultative meetings with the communities and hence this has brought about conflict with the communities involved and Hwange district at large.

“In terms of First Schedule (Section 2 and 97) of the EMA (Environmental Management Agency) Act Chapter 20:27, mineral prospecting, a process which comes before exploration requires an EIA (Environmental Impact Assessment) and in this case it was not done. Nambya people are a minority and if culture and heritage is disturbed or destroyed we will end up being extinct, displaced or lose our culture,” the petition reads.

It added; “The mine will disturb graves of our ancestors, the Nekatambe dynasty and shrines where rituals are carried out. Our ancestors are custodians of our history, watch over us and protect us as a community and family hence disturbing their graves you are distorting and destroying our heritage, culture, protection and our keepers.”

Meanwhile, the Centre for Research and Development, Farai Maguwu, speaking during a recent virtual meeting, said a letter of demand had been sent to the mining company requesting to see the purported special grant.

“We sent a letter of demand to the miner requesting to see the grant and EIA but they failed to produce,” he said adding the community had a legitimate right to oppose the proposed project.

However, an environmental consultant, Oliver Mutasa said there was little the community can do to stop the exploration process.

“Unless if it’s an ecological area like a national park, but unfortunately for an area like Dinde, once a special grant is given, mining activities cannot be stopped,” he said.

“However, if there should be displacement, there should be compensation. Sometimes people lose out on compensation because instead of contributing to the EIA they oppose the whole process. What people need to do is contribute on what they want the miner to do as part of corporate social responsibility.”