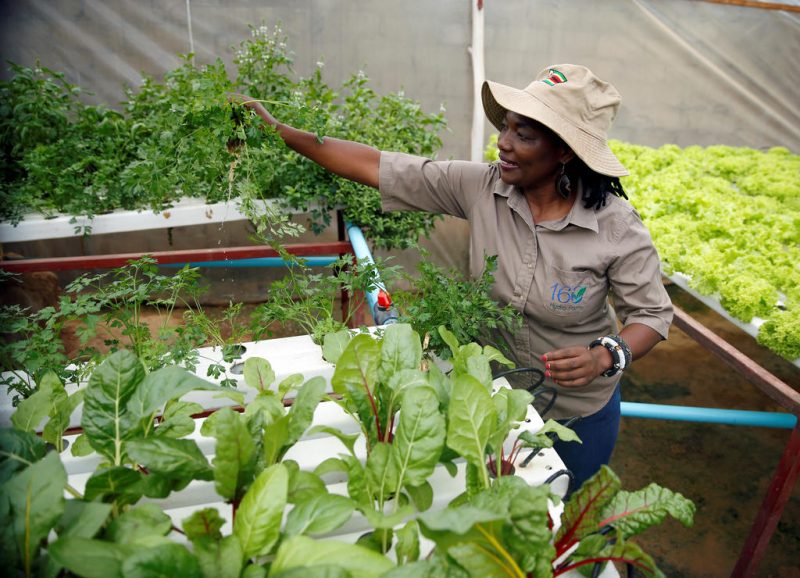 DESPITE limited space in her backyard, and the shortages of water facing most urbanites in Zimbabwe, Venensia Mukarati runs a thriving hydroponic farm in an upscale north-eastern Harare suburb.

The initiative that started two years ago as a sustainable way of providing fresh produce for her family has now become a profitable venture supplying vegetables to some of Harare’s restaurants.

“Hydroponic farming is the future of farming,” Mukarati told Xinhua. “You can have a small system or a big system in an area where it is drought-stricken.

Hydroponics is the practice of growing plants in nutrient solutions without the use of soil. Water is conserved because it is recirculated and reused.

“We are having so many challenges when it comes to rainfall patterns in Zimbabwe, so this type of farming, it helps so much, it doesn’t use so much water, it saves water by 90 percent,” she said.

The main advantage of the futuristic method is that farmers can have total control over the hydroponic system, which can allow them to create farms in locations where soil conditions are too poor to support conventional farming.

A climate-controlled environment promotes year-round growth rather than waiting for the right season to grow particular plants. The method also ensures the farm can exist in places where weather and soil conditions are not favorable for traditional food production.

Mukarati said the potential to grow food in small spaces, under any environmental conditions, are certainly big advantages in an urban context, adding that adopting hydroponics at a much wider scale can be a hedge against climate change-induced chronic food shortages.

“The other advantage is it grows so fast, it grows by at least 33 percent faster than the conventional way of farming, so that is one big advantage of using hydroponic farming,” she said.

Mukarati said another benefit of going the soilless route is that it generates more income as it barely requires manpower to maintain the system.

Last year, she began training others to practice hydroponic farming, and to date, about 150 people have undergone the training.

The Covid-19 induced lockdown pushed the training online, which has helped her to reach more trainees including those based outside Zimbabwe.

At least 10 of her students in Zimbabwe and some as far as Australia are already practicing hydroponic farming.

Mukarati is now offering installations of hydroponic systems to those who are interested. A small hydroponic “starter pack” sells for 200 U.S. dollars.

However, she said the main drawback of hydroponics that may deter many Zimbabweans from adopting the method is the costs associated with setting up the system since nearly all components needed to run the system are imported.

Mukarati bought her own system from South Africa, but in order to trim the costs down, she is now buying the components straight from the manufacturers in China.

She hopes to quadruple production once operations at her new farming site on the outskirts of Harare become fully operational before the end of this year.