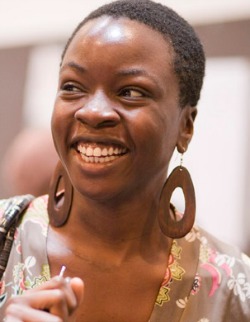 With the return of the fourth season of hit US horror-drama television series The Walking Dead, all eyes have been on Michonne, the stoic, sword-wielding zombie slayer played by Danai Gurira, 35, who’s also an award-winning playwright. In these excerpts, Danai talks to Rolling Stone and TIME about the show and, well, pretty much everything else.
Question: Where did you grow up?
Answer: I call myself Zimerican. I was born in the Midwest to Zimbabwean parents. My father was a professor at Grinnell College in Iowa. We moved to Zimbabwe when I was five, some years after Zimbabwe had gained independence.
Q: I’m sure that was a breeze.
A: It kind of was, because I was so young. Zimbabwe was at its height. It was the gem of Africa. It had a lot of modernity. It was in a very interesting moment.
Q: Was this the early Mugabe years?
A: Yes – the very early years. It was considered the most successful African nation. I was in a very multi-racial, multi-cultural schooling system. I had a really delightful childhood. I was a jock. I became a very competitive swimmer in Zimbabwe. I was a swimmer, a tennis player, a hockey player. Then, when I was 13, I joined a Children’s Performing Arts workshop in Zimbabwe. I never got good at tennis, which was painfully sad, but I love it still. I love watching people who know how to do it.
Q: Tennis is hard!
A: It is! There’s something about the stop-start that I just lose all momentum. And maybe I don’t have the attention span to keep stopping and starting. But I adore the sport and I love watching the pros. It’s one of the few sports I’m dedicated to as a viewer.
Q: And now you play with swords. Know any tricks?
A: Generally with the sword we’re trying to keep everyone alive – Michonne isn’t, but Danai – so I keep the tricks to a minimum. But I do have some dings on my apartment wall from some tricks I was attempting at home. I don’t advise that.
Q: But you went to college here (in the US)?
A: I went to Macalester in Minnesota to study social psychology, the study of why people do what they do. I was really looking at race, population, gender and how we psychologically function in a way that affects our societal outcomes around those issues. I was thinking maybe I’ll get a Ph.D. and live the cushy academic life. I wanted to bring some voice to issues that concerned me. I couldn’t see how the dramatic arts were going to make a huge change. But then I went to South Africa and met all these artists who had done things to affect change through their art during apartheid. I got totally convicted that what I needed to do what was tell African women’s stories – the unheard voices.Advertisement