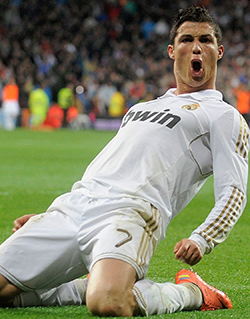 REAL Madrid coach Carlo Ancelotti has brushed aside reports that Cristiano Ronaldo will leave the European champions in the near future.
The English media have linked the Portuguese star with a return to Manchester United, a move that would cost the Red Devils a reported £200 million.
Ancelotti insist Ronaldo, who joined Real in 2009 after six seasons at Old Trafford, is happy in Madrid.
Moreover, the Spanish giants have no intention of selling the World Player of the Year any time soon.
“I can’t imagine a Madrid without Ronaldo,” Ancelotti said in Friday’s press conference. “These reports make no sense.
“He is delighted to be at Madrid and the madridismo (the club and fans) are thrilled with Cristiano.”
The 29-year-old is under contract with the Bernabeu outfit until June 2018.
“Right now he (Ronaldo) is without a doubt the best player in the world,” Ancelotti said. “To defend him is not easy and we are fortunate that he plays in our team showing a lot of hunger, character and personality.
“He plays like a leader.
“We have to have him well physically and mentally because he is a player that wins you titles.”Advertisement