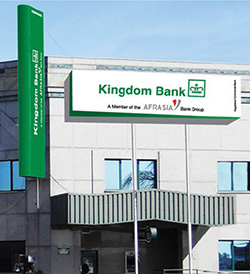 “THE bank was at the time not making much money and ‘Jesus Christ does not want you to do business without profit’”, Christian and founder of Kingdom Financial Holdings Nigel Chanakira said Saturday as he explained his decision to sell the company.
Now an executive director with Success Motivation International (SMI), a one-time United States-based leadership management institute which once rewarded him for being its best client, Chanakira was addressing a gathering of budding entrepreneurs and Christians at a Gweru hotel on Saturday.
The University of Zimbabwe trained economist first merged his Zimbabwe Stock Exchange Listed bank with hotel and leisure group Meikles but the deal collapsed following shareholder spats.
Needing new funds to recapitalise, Kingdom then attracted investment from Mauritius-based AfrAsia Holdings and Chanakira recently exited the group, giving up his remaining to AfrAsia in a cash-for-equity deal.
Local media reports suggested that Chanakira had been forced out as one of the conditions for rescuing the bank from possible collapse.
“I do not understand what the media implies when they say it did not work,” Chanakira said last Saturday.
“This coming Wednesday, they are paying me the remainder of my monies; is that your idea of a failed partnership?
“I want money, and I want lots of it. Even if my bank was not (doing well), I sold it to get lots of money.
“However, I did it to partner with the church in reaching out to lost souls. It rolled out 20 indigenous churches.”
A member of Pastor Tom Deuschle’s Celebration Church, Chanakira added: “Businessmen from the west sent people like David Livingstone to Africa with the gospel … likewise my pastor is the silent board member in all of my companies.”
The banker was named global leader at the 2001 World Economic Forum while his Kingdom Bank was named the best turnaround on the Zimbabwe Stock Exchange in 2006.
It was a misconception, he advised rising entrepreneurs, that one needed capital to create wealth.
“We have spiritual capital which is more important than financial wealth,” he explained.
It was important however, to focus on one area of competence instead of trying to be everything and do everything all at once.
“Choose just one area where you want to be God-like and dominate, vamwe tinowanza, you cannot do everything,” he said.
Speaking at the same Wealth Masters event which was organized by his Beam of Hope International Churches, Bishop Hosiah Tagara suggested that a poor man could not propagate the gospel of Jesus Christ.Advertisement

“It requires money to preach the gospel across nations,” he explained.
“We are still in Gweru but are busy working on projects in South Africa, South Sudan and elsewhere, and with no money, that cannot be easy.”
According to his organisation, Bishop Hosiah Tagara “has been mandated by the Lord to raise a force of Kingdom entrepreneurs and release marketplace apostles with a magnetic anointing to draw resources, golden connections and create wealth for generations and for the Kingdom.”