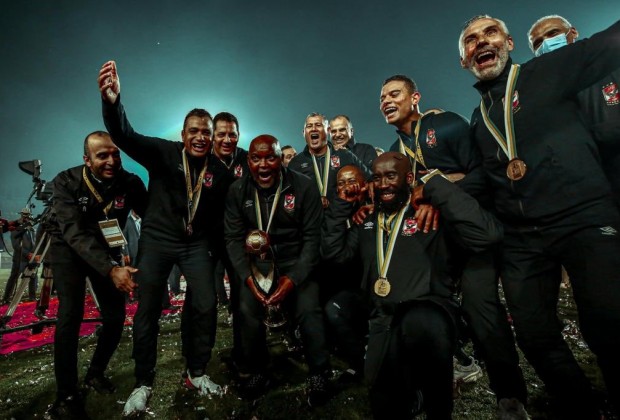 Pitso Mosimane says he expected to win the 2019/20 CAF Champions League when he resigned from Mamelodi Sundowns to join Al Ahly.

Having joined the Egyptian giants straight after leading Sundowns to a domestic treble, Mosimane succeeded Rene Weiler and was talked to see off the 2019/20 season.

With the league already secured prior to his arrival, Mosimane steered the Red Devils unbeaten towards the official title presentation, beat Wydad AC 5-1 in the Champions League semi-finals and moved towards the Egyptian Cup semis.

And Friday’s Cairo Derby triumph against Zamalek, the first of his career, ended Ahly’s seven-year wait for their ninth star, only two months into his stint as the club’s head coach.

“The team was already in the semi-finals, so that’s why I’m here, I’m here for the Champions League, so I expected to win,” he said.

“We have a good team and we’re a big team and if I don’t believe we can win then why am I here? Not to say I knew we’d win easily because we played a good team.

“Let’s be honest they were very good, but at the end day it’s a cup final and derby and we won the bragging rights, Inshallah we’ll win [the Champions League] again.”

On beating Jamie Pacheco’s Zamalek side who produced an inspired display after conceding to Amr El Suluya’s sixth-minute header, Mosimane paid homage to their performance and jokingly suggested the success may offer him freedom.

“They have a good team, they played well, they really gave us a big scare and made us play better in the second half, they were much stronger,” Mosimane admitted.

“They played like us in the first half, that’s the way we play but Al Ahly fans, this Champions League trophy is for them. I hope Inshallah corona passes then we can have them in the stadium.

“They deserve the trophy, they’ve waited long, every week they ‘came to the training sessions, everywhere I go they say ‘win the trophy, win the trophy’, maybe I can be a free man now [laughs].”