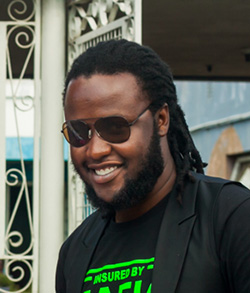 GOSPEL music icon Mechanic Manyeruke has revealed that he is yet to listen Guspy Warrior’s (real name Emmanuel Manyeruke) music despite him having made it big in Zimdancehall.
Over three years after entering the music scene, Guspy maintains that he has no regrets over his genre and choice of lyrics which range from sexually suggestive themes to drugs abuse.
Popular for his biblical lyrics and artistic serenity, Manyeruke has admitted that, despite all the noise his son has made in the music industry, he is not yet summoned the courage to listen Guspy’s “crazy” lyrics.
“I am yet to sit down and listen to any single album except what I come across on television,” said Manyeruke in a documentary screened in Harare recently courtesy of the International Images Film Festival.
Guspy’s hit song Seunononga, which shook the airwaves in 2013, is premised on mischief with the video loaded with sexually-suggestive dance style.
Notwithstanding his father’s attitude towards his type of music, the youthful artist revealed that he is devoted to Zimdancehall and has always been ready to overcome family resistance.
“I had to be firm. I said you guys are going to be disappointed but I stand for what I believe in,” he said.
The two musicians with diverging genres were featured, together with many other artists, in the documentary And The Beat Goes On which profiles at least two generations of Zimbabwean musicians.
Although Manyeruke, who said his best album ever is Ari Mandiri Jesu, has since gone public declaring his love for his son, it appears he is still struggling to accept Guspy’s genre.
“My music targets the youths. I chose to sing music for my age.
“I am always positive and always try and encourage people of my generation not to worry because things will be alright,” added Guspy.
Musician Bob Nyabinde said, “I respect Guspy Warrior. He is a totally different artist and has made it clear”.
Guspy Warrior: Seunononga