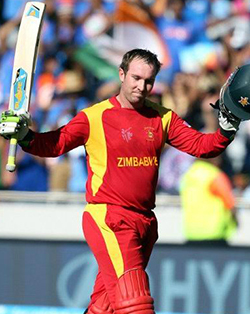 “Hide not your talents, they for use were made, what’s a sundial in the shade?”- Benjamin Franklin had once said. Whether or not it was sheer talent, persistence or hard work that played a part in Brendan Taylor’s success, it ultimately made a vast difference to Zimbabwe cricket.
Starting out when he was just five, going to junior school run by the Campbell family, Taylor has come a long way since. Rugby and hockey consisted a large part of his childhood, but neither could outweigh cricket – something that his father helped him through – be it just by travelling to every game with the family, or just stand by him when the going got tough. Taylor’s premature retirement after the World Cup 2015 left the cricketing fraternity disappointed; he lent hope to Zimbabwe cricket. However, Taylor had his reasons to make the choice at that stage in life.
He has since, featured in the Bangladesh Premier League and now is ready to kick-start in a new adventure at the Masters Champions League in Dubai. Speaking to Cricbuzz in an exclusive chat, Taylor opens up about his international career, his dream farewell, leveraging on the talent he possessed and much more.
You are regarded as the best batsman in Zimbabwe’s history do you agree with the assessment?
I think people might be judging me slightly statistically. Andy Flower is Zimbabwe’s greatest ever player. I don’t think it is fair to judge me on that level. When I look back now, I think maybe if I had played for another eight-nine years for Zimbabwe, then maybe I could gauge myself against someone like Andy.
Your contributions were vital, what you would attribute your success to?
People speak about being mentally strong. If you’re playing Test cricket then that has to be in majority. I used to practice very hard and designate a lot of time with Grant Flower who was our batting coach. We couldn’t have asked for a better guy then; we spent three years with him. He was very dedicated to his job and would spend many hours with the batsmen. I always made sure I was a part of that.
They say hard work pays off but you have to buy into that work ethic. It just gave me the peace of mind that I’ve done my work and can go into every match knowing that I’ve prepared as well as I possibly could – that held me in good stead.Advertisement

You adapted supremely well to match situations and delivered in accordance. How did you ensure of that?
Experience helps. Every player gradually improves his mental state of mind and his approach towards the game. I guess it was very difficult at the start of my career because we lost a lot of very valuable players to the World Cup, so for the first few years it was all about teaching yourself to play in tough situations, something we probably would have done a few years later. If we had played with the likes of Andy Flower and Grant Flower for longer periods of time, it would’ve only made us better cricketers.
Was it a challenge developing that kind of maturity or did it come naturally?
Coming in at 18 after an Under-19 World Cup tour, to be thrust into playing against Sri Lanka and Australia which was our debut series was a huge wake-up call. But with a few individual performances on the way, it did give me the belief that I did belong and that I could challenge myself against the best in the world. I think there was natural ability as well.
But you must have had mentors. Who would you say had a tremendous influence on your career?
Ian Campbell and my father – those were the main ones. As I got older and started playing international cricket, Grant Flower and Alistair Campbell were very, hands down. The guy that I looked up to the most though was Andy Flower despite not having had much to do with him. Alistair Campbell’s advice and knowledge of the game and Grant Flower’s time and effort to help me is something I’ve always been grateful for.
You played two Under-19 World Cups. Was that validation in itself that you would make it big someday?
I was 15 years old for the first one in New Zealand in 2002. I managed to score a century against Nepal. Even though they might not have been the greatest side, being so young and playing with guys three-four years older to me, and getting those runs was another boost in confidence. It definitely helped me grow up a lot quicker and develop quicker as a cricketer.
Your unbeaten 45-ball 60 at the World T20 in 2007 helped beat Australia how much did that mean?
It didn’t feel real. T20 was new to all the players given that it had just started. But to beat Australia, the side that they had, really gave Zimbabwe the belief that we can shock big teams. We’ve done it on quite a few occasions, but we’ve lacked consistency.
Despite all that, your commitment was questioned around 2007
I was around 21 then and I got into a bit of strife sometimes; it was a combination of being a bit ill-disciplined, but that was all a part of growing up and taking responsibility as a professional cricketer. Dealing with certain coaches and administrators was frustrating. By 2009, I had played a season in England and straight from there went to play in Australia. I needed to get away from all the negativity in the team. The way the team was being run and handled made me choose to take a year off and play elsewhere. When I came back, I was hungry for international cricket again. I was always hungry, but the environment was pretty poor.
What kept you going?
Representing your country is special for anyone. I was always very driven by playing against the best players and doing as well as I could for the team. I was passionate about the team and I just wanted to contribute to Zimbabwe cricket and I did regardless.
Was captaincy something that motivated you?
I wasn’t one in representative levels but I always wanted to be captain and I loved every minute of it. There came a time when Zimbabwe cricket needed a change and they looked at me for the job which I grabbed with both hands. It got the best out of me individually. I enjoyed that extra responsibility. I hit a patch where I went through the most consistent run of form.
When we came back to Test cricket in 2010 after five years, I captained the side and managed to get some runs in a winning cause against Bangladesh. That was an amazing feeling! Also, to finish the World Cup on a high, knowing it was the end, was immensely satisfying.

Could you have asked for a better end?
It was a dream end. Unfortunately, we couldn’t win. It was nice to end on a successful note as an individual. I thoroughly enjoyed the World Cup. I didn’t put myself under any pressure. Just went out and had a lot of fun playing, knowing inside that it was my last series for Zimbabwe. I felt in a good space and knew it was a positive move that would follow at the end. I think that contributed to a couple of decent scores.
You were doing so well, what spurred you into making the decision to leave?
It was the toughest decision I’ve ever had to make. I was concerned about the future of Zimbabwe cricket and with the administration side of it. I felt people were not qualified enough to run Zimbabwe cricket officially and just the way we were treated as players. It was really difficult to try and play the best cricket you could and deal with the issues. The decision made sense for me personally and from the family perspective.
Zimbabwe cricket has been good to me over the years but I just felt that by playing in England and being involved in one of the best clubs in county cricket would only better me. But I do miss walking out onto the field to play for Zimbabwe and against the best teams in the world.
Did you ever regret it?
I’ve enjoyed my first year at Nottinghamshire and I feel like it’s only going to get the best out of me. It’s such a professional structure. They really look after their players and that’s something that has not happened a lot in our careers in Zimbabwe. So, for me, the only regret I have is not representing Zimbabwe for longer than I did, but I don’t miss the other challenges.
Where do you see Zimbabwe cricket headed?
We’ve been crying out to play a lot more cricket. This year has been the most packed 12-month period for us and that’s been great. Were only going to improve by playing more. If that continues, it will help, but I’m concerned whether our development system, U-19s, U-16s, U-14s, is being run officially; I don’t think the quality of coaches we have in those structures is up to the mark and if you don’t have a grass root system in place, how are you going to get players coming through the system? That’s a concern for me.
I think the ICC has done a fantastic job of bridging the gap between Associate and the bottom-most Test-playing nations. That’s a wake-up call for Zimbabwe cricket, but like I said, playing cricket against good sides away from home will be key. We’ve got a decent record at home; playing in different conditions will definitely help us.
Will we be seeing you in a coaching or administration role at some point?