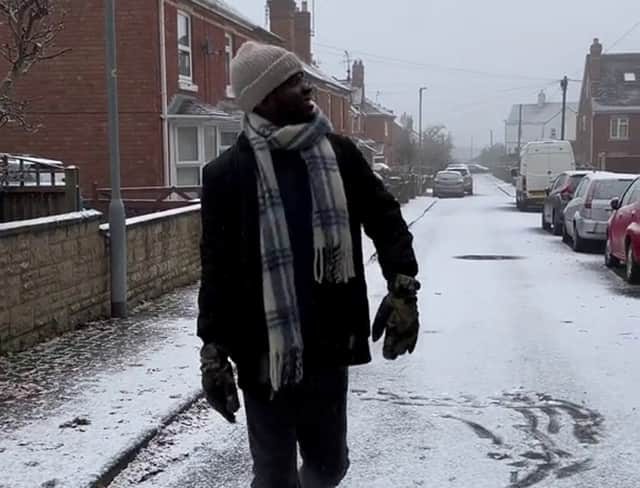 “I felt like a baby for the first time ever seeing the snow. I honestly wanted to cry because I was so emotional.”

LONDON: A man was left giddy with excitement and emotional after seeing snow for the very first time.

The wholesome video shows Noel Bako, 27, all smiles and prancing through a thin layer of snow after freezing temperatures hit the UK this week.

Noel moved to England in June to be with his wife Jaima, 29, after the pair met in 2019 at a game park in Gweru, Zimbabwe.

“I felt like a baby for the first time ever seeing the snow. I honestly wanted to cry because I was so emotional,” said Noel, who had only seen snow on TV before.

“I had seen snow on the TV, but I actually thought it might have been fake. I felt like I was on TV seeing it here. I can’t wait for it to actually snow heavily.”

Noel was working as a procurement clerk in Gweru, when he met Jaima, who was volunteering.

He said: “I was enjoying my work one day, and I could tell she was watching.

“She approached me and made the first move.”

Jaima flew back to the UK after her volunteer work ended, but returned to Zimbabwe for Noel in January 2021.

She added: “We just kind of fell in love straight away. It’s hard to tell, but I knew I was attracted to him from the beginning.”

The couple were married in March 2021 and applied for a spousal visa, which was accepted in June.

The pair now live in Malvern. Worcs., where Noel works as a chef and Jaima as a care worker.

Jaima said: “It sounds really cringy, but since he came here he’s done lots of things for the first time, like Bonfire Night and Christmas.

“I feel like a mother showing her kid the world. It was the same for me when I went to Zimbabwe.

“This wasn’t actual snow, so when it snows properly, it’s going to blow his mind I think.”