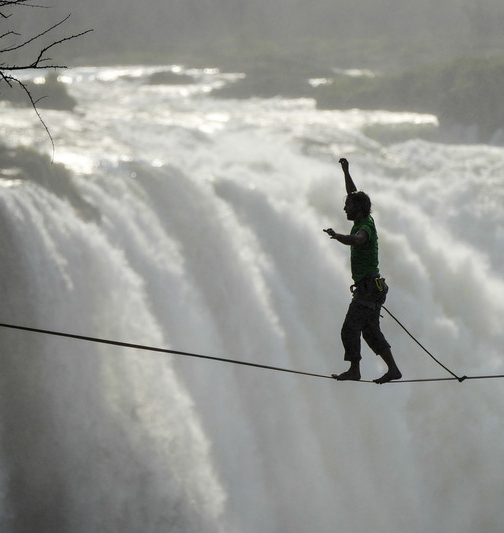 DAREDEVIL highwire-walker and Austrian crime author Reinhard Kleindl has shot to fame after crossing the 108 meter Victoria Falls on the Zambia-Zimbabwe border. He spoke to Russia Today (RT) about his motivations and safety precautions.
He was accompanied by thrill-seeking Chemistry student Lukas Irmler from Freising in Germany, and they both made the crossing safely without slipping or having to rely on their safety cords.
Both men have become the first to cross the Victoria Falls gorge using a slackline. Slacklining involves much higher concentration level than tightrope walking. It requires more balance because the line is not held rigidly taut. Instead it’s dynamic, stretching and bouncing like a long, narrow trampoline.
RT: So why Victoria Falls?
Reinhard Kleindl: I think it was just the coolest thing we could think of – the waterfall is obviously something that has height involved because the waterfall has to go down somewhere. Waterfalls have been popular for tightrope walking – the Niagara Falls was done in the 19th Century, but the Victoria Falls have never been done before, so that really attracted us and made it a cool project.
RT: Tell us more about the experience. Is this the most dangerous thing you’ve done?
RK: High-lining is something that can be done pretty safely. There are some technical issues involved but we used belays so we were pretty safe doing it. The fear thing is actually a main thing – you try to have it objectively really safe.
RT: What safety precautions did you take?
RK: I have never done it without the safety – the safety precautions are that you are wearing a climbing harness and a safety leash that is attached to the line. And the line is actually a double system that has a backup option, so if a line rips there’s a backup rope. This is really important – it’s a sport that involves falling also. Sometimes you fall, and you don’t want to die any time you fall. Still, it’s tricky to have it safe because there’s tension involved and actually the setup is something you develop yourself, and you have to know what you’re doing to have it safe.
RT: How did you get into this rather dangerous occupation?
RK: I find it interesting to have my life in my own hands – to find my own decisions and to have it as safe as I want to have it. So nobody tells me what to do to make it safe – I have to decide that for myself – this is really interesting for me – the technical aspects also of making it as safe as I want to feel comfortable with it.Advertisement

RT: You spent months negotiating with Zimbabwe’s authorities. Why did it take so long to get the green light?
RK: It was not all about getting the green light that took us so long, but also about finding out the correct water levels and getting everything prepared. Obviously it was hard to get permission, but also because it’s a national park and you shouldn’t leave any traces there, so it was an issue, and obviously convincing people it was safe what we were doing – this was the hard part but we managed it.
RT: What could you possibly do next to top Victoria Falls?
RK: I’m thinking about new projects right now, but I also have to say I’m really satisfied with this project; I really like the way it turned out and I think it looks beautiful. I don’t think I have a topic right away – watch the footage – enjoy it, stay tuned!