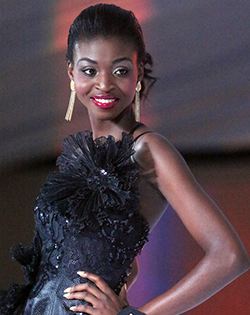 FORMER Miss Zimbabwe, Emily Kachote, hinted on Monday that she may take legal action to protest against the unceremonious way she was stripped of her title.
Kachote, 25, was told last week she could no longer represent the country as Miss Zimbabwe after nude pictures of her emerged.
The rules of the pageant insist that all models taking part must never have posed naked.
The model was described as “ugly” by some Zimbabweans soon after she was named Miss Zimbabwe in April.
But she isn’t going down without a fight.
“I’ve never posed for any nude or indecent picture in my life,” she wrote on Facebook on Monday.
Her argument appears to hinge on whether she actually “posed” for the contentious photos, which were allegedly leaked by a former partner, or whether the pictures were taken without her consent.
According to the local media, Kachote maintains she did not consent to the pictures being taken and therefore did not “pose” for nude photos.
“What happened, I’m not proud of it, but I’m not ashamed of it either,” she was quoted as saying.
A day after she was told she was being stripped of her title, Kachote said she was “waiting for [my] attorney” and would hold a press conference soon.
Unconfirmed reports say she has refused to hand back her tiara and insists she is still Miss Zimbabwe.
Some Zimbabweans have been critical of Kachote. They include pageant organisers Miss Zimbabwe Trust, which allegedly accused her of being “reckless, a drunk and a liar”, according to state media.
But others have defended her.
Writer Tino Hondo tweeted: “Am angry at the firing of Miss Zimbabwe not only coz she dark like me but this rule that Miss Zims hev to be ‘moral’ has to go.”
She said: “Moral women do drink beer and have sex.”
Kachote is not the first Miss Zimbabwe to lose her title over nude pictures.
Last year’s winner Thabiso Phiri lost her crown over similar allegations. The Miss Zimbabwe Trust insists she resigned voluntarily.Advertisement