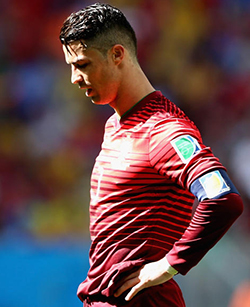 THE mother of superstar Cristiano Ronaldo has made some shocking revelations about her attempts to abort him while she was pregnant.
Dolores Aveiro revealed her story in a biography entitled Mother Courage which has been released in Portugal and it included some startling claims regarding the Real Madrid star.
Aveiro admitted that she drank alcohol and ran ‘till she dropped’ in an attempt to abort him.
She said she drank warm beer and exercised to the point of exhaustion following the refusal of doctors to carry out the procedure with Ronaldo, who is the youngest of four children.
“I wanted to abort but the doctor didn’t support my decision,” she said.
She revealed that Ronaldo understood the story regarding her troubled pregnancy with her husband Dinis, who died from alcohol-related liver damage in 2005.
“He told me when he found out, ‘Look mum, you wanted to abort and now I’m the one who’s pulling the purse-strings in the house’.”
Aveiro also explained that Ronaldo had told her he was ‘going to have a child’ and wanted her to help educate and love the boy, named Cristiano Jr.
She says she picked up the child, whose mother’s identity remains unrevealed, from a Florida clinic in 2010 while Ronaldo was playing at the World Cup in South Africa.Advertisement