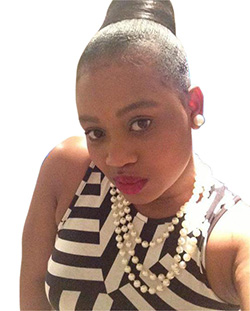 THE mother of former child television star Makanaka Wakatama has claimed that she tried and failed to stop her daughter getting hitched to the married Harare businessman who made her pregnant when she was just 15-years-old.
Makanaka’s story has returned to the headlines after the former ZTV child star, now aged 24, announced she was establishing a trust to help address the problem of child marriages.
Writing recently about her experience, she said: “In 2006, I made newspaper headlines after I was impregnated by a businessman and entered into an early marriage at 15 and gave birth to two children by the age of 17.
“The story became the subject of intense debate as I was a minor. With little knowledge of my rights as a girl, there were many nights of forced sex and violence. I was young and naïve.
“After time spent in meditation and observing what was happening to me and my children, I picked up the pieces of my life and began to move on as a mother of two.”
The article however, drew howls of protest and derision, many telling Makanaka that her story was not just about victimhood but greed and foolishness.
Critics reminded Makanaka that she and her mother rebuffed efforts by child rights groups to rescue her and have the wealthy businessman prosecuted.
However, Makanaka’s mother who, at the time reportedly claimed her daughter was 16 years old and therefore not a minor in terms of the law, has now sought to exonerate herself from blame, claiming she also tried to stop the marriage without any success.
“I tried to stop the marriage with the support of women organisations to no avail,” Memory Gwata said in an interview with the Herald.
“All my efforts were fruitless because Makanaka claimed she loved her husband. As a mother I had no choice but to support my child.”
She added: “I only knew about my daughter’s pregnancy when she was four months pregnant with the child. I did not know because she had left the country to go and study in the United States.
“She came back without my knowledge. I only got to know that she was back in the country through the media as well as the revelations that she was pregnant.”
Makanaka also said her mother was not to blame, explaining: “I blocked my mother’s help and other women organisations groups.”Advertisement

Gwata said the blame game should now stop and urged society to support her daughter’s new campaign against child marriage.
“There is no need for people to blame her or each other because Makanaka has already taken full responsibility of her actions and the results thereof,” she said.
“This is no longer about Makanaka. She is there to tell her story on what she went through because she is a survivor who wants to help.
This is about other girls out there who need to get information on the effects of child marriages.”
Makanaka added: At that time I protected my then husband.
“But today when l speak to girls l always tell them we need to listen to our parents, they will guide us because they know better.
“We want to empower other children in the same situation that Makanaka went through. My dream is to see every girl being allowed to fulfil their full potential before they decide on marriage.”