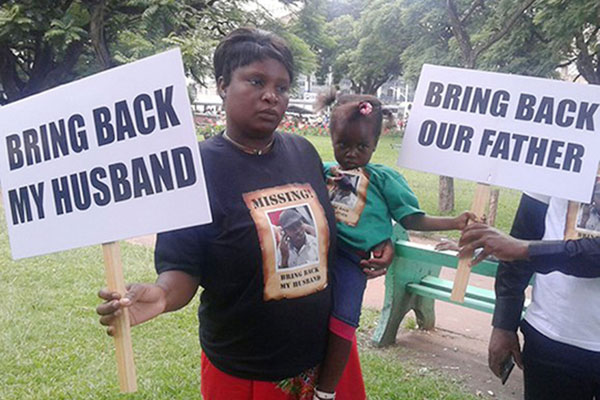 WEARING a red Manchester United replica jersey with black shorts and sandals, prominent activist Itai Dzamara left his home to get a haircut at the neighbourhood barbershop in Glen View, a high-density suburb south of Zimbabwe’s capital, Harare.

In a few minutes he would be back, he told his wife, whom he asked to prepare breakfast. Sheffra Dzamara did so and waited for him to return. But an hour later, a neighbour rushed to their house and delivered the devastating news – Itai had been taken.

According to Sheffra, unidentified men outside the barbershop accused her 35-year-old husband of livestock theft, seized him and bundled him into one of their unmarked pick-up trucks before speeding off.

Itai has not been seen since that morning, and his whereabouts remain a mystery.

A former newspaper journalist and the founder of the Occupy Africa Unity Square movement calling for the resignation of Robert Mugabe, Zimbabwe’s longtime leader who died in 2019, Itai was a rising political star at the time of his abduction.

Just days earlier, he had told thousands of people at a rally in Harare that was organised by the late opposition leader Morgan Tsvangirai that Zimbabweans should rise up against Mugabe.

Some believe Itai, who had a reputation for being extremely courageous in a country that had long been governed with an iron fist, could have been taken by state security agents.

“Every day I think about him,” the 36-year-old said. “I carry a lot of hurt and pain in my heart. I want answers and no one is giving me [any].”

For the past six years, Sheffra has had to grapple both with the harrowing disappearance of her husband and fending for their two young children. She said she is grateful for the support she gets from relatives, friends and well-wishers.

“Life was much better when Itai was there.”

‘I am going to fight’

A year ago, Sheffra sent a letter to Emmerson Mnangagwa – Mugabe’s former deputy who took over from him in a November 2017 coup and promised to build “a new democracy” – requesting him to shed light on her husband’s whereabouts and to ascertain what happened to him.

“The president hasn’t responded to my petition,” said Sheffra.

But she refuses to give up. “I have to fight so that my kids know what happened to their father,” she said. “I am going to fight.”

Al Jazeera contacted Nick Mangwana, the information ministry’s secretary, for comment but did not receive a response before publication.

In March last year, Mangwana had released a statement saying the “government feels very strongly that no Zimbabwean should disappear without a trace and empathises with the Dzamara family in their quest for their loved one’s safe return. To this government, every Zimbabwean counts”.

But with no new information about her husband’s whereabouts, Sheffra said she has doubts over the government’s commitment to the case.

“I don’t think they are still investigating,” she said. “It’s like they have forgotten about it … It’s like Itai never existed.”

She is not the only one yearning for closure. The couple’s 13-year-old son, Nokutenda, and eight-year-old daughter, Nenyasha, also want answers.

“They know what happened to their dad. Most of the time they just ask me when their dad is coming back,” Sheffra said.

It is a question she has found very difficult to answer. “[I tell] them only God knows and let us keep praying.”

Musa Kika, executive director of the Zimbabwe Human Rights NGO Forum, said Dzamara’s open case has engendered a sense of widespread impunity due to lack of accountability on perpetrators of abductions and enforced disappearances – a practice long endured by activists in the country.

“Itai was abducted for exercising his constitutional right to demonstrate and petition and was calling on the then-President Robert Mugabe to step down amidst a deteriorating economy,” Kika told Al Jazeera, calling for “an independent, effective and transparent investigation”.

But he added: “The Forum believes there is no commitment by the government to deal with the Dzamara case. High Court Judge Justice David Mangota ordered the police to fully investigate the disappearance of Dzamara.

“However, no meaningful investigation has taken place, as evidenced by the absence of any comprehensive reports submitted by the authorities to the courts,” Kika said.

“Zimbabwe Human Rights NGO Forum calls upon the government to conduct an independent, effective, and transparent investigation into the disappearance of Dzamara and to ensure his safe return,” Kika said.

Even though Itai is missing, Sheffra says the family still celebrates his birthday on August 7 and regularly plays songs by Leonard Zhakata, a popular Zimbabwean musician whose work tackles social injustices.

“I still have hope that maybe one day my husband will be found,” she said. Asked if she feared the worst, Sheffra seemed unprepared to confront such a scenario. “It’s in God’s hands,” she said.