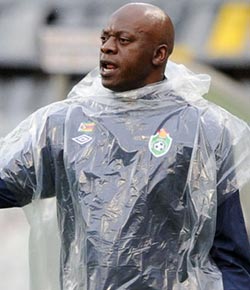 IAN Gorowa threw in the towel Monday night ahead of a Zifa board meeting that was due to decide his fate on Wednesday afternoon.
The coach was also due to appear before the Parliamentary Portfolio Committee on Education, Sports, Arts and Culture on Thursday to explain the Warriors’ failure to qualify for the 2015 Africa Cup of Nations football group stages qualifier .
The Warriors lost 1-0 away to lowly Tanzania and drew 2-2 at home to bow out of the competition.
In a letter addressed to Zifa president Cuthbert Dube, Gorowa wrote: “This is my letter making it official that I have stepped down as coach of the national team.
“It didn’t take a rocket scientist to see that all is not well, my working relationship and the Zifa secretariat headed by Jonathan Mashingaidze. I should have done this a long time ago thinking we might resolve and work towards rebuilding the shattered image of the game in Zimbabwe.
“I therefore believe it’s time to move on and would like to thank everyone who made my stay as coach a success and would cherish every moment during my stint. I was in charge of the team for 17 games and I lost only two matches.
“My reasons are personal and, among others, the HPC (High Performance Centre) spats with me in the press, the unpaid amounts being owed to me, seven months to be precise, refunds, airfares, accommodation, Chan bonuses which the secretariat ignored despite all my pleas.
“Nonetheless, I wish everybody within the board all the success. To Dr Dube, the board president, you paid me my salary and I appreciate that, and even when you stopped that was the last time I got paid but football to me is all about relationships and I will continue supporting in any way you want my help.
“At least I have done what was left for me which was to coach in Zimbabwe and I did it with pride, diligence and passion, unfortunately we did not qualify to go through to the upcoming 2015 Nations Cup.”
The coach said he has not been paid a salary for the last seven months and was also owed a bonus payment after taking Zimbabwe to the semifinals of the African Nations Championship in South Africa earlier this year.
Gorowa lost two of his 17 matches in charge of the team, but one of those came in a qualifier for the Nations Cup against Tanzania that saw Zimbabwe ousted from the preliminaries.Advertisement

The former international winger took over the position of coach from German Klaus Dieter Pagels in July last year.