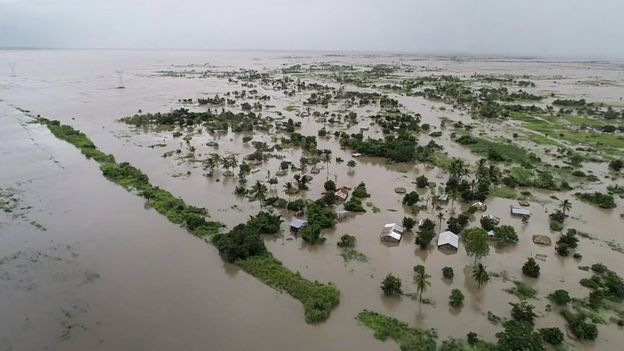 THE death toll from the devastating Cyclone Idai, that barrelled through Zimbabwe’s south eastern districts last week has gone up to 142, according to officials.

“As things stand, the death toll has gone up to 142 and we expect it to rise. There are a lot of people who are still missing.

“Some of these people might turn up dead while others may never be found. It’s a gory spectacle that has befallen our country,” said Mangwana.

Over 200 people are reported to be unaccounted for since the natural phenomenon that rocked southern Africa and left a trail of death and destruction in Mozambique, Zimbabwe and Malawi.

Mozambique’s port city of Beira was reportedly left in ruins, with at least 90 percent of its infrastructure destroyed.

Amid claims hundreds of bodies of Zimbabweans have washed up in the neighbouring country, Mangwana said the issue is still under investigation.

“We are still looking into that matter. The only deaths we can confirm are those of the 139 in Manicaland, two in Masvingo and one in Mashonaland East,” the Information Ministry permanent secretary said.

According to Mangwana authorities struggled to access the border village of Rusitu until the army had a breakthrough, Thursday.

“Rusitu has been difficult to reach but the army is there now and assessing the situation. We still have people marooned and over a hundred missing.

“We naturally in such circumstances expect the death toll to rise, given we have lots of people still missing,”  he said.

Schools have been forced to close following the tragedy that has shaken the country with citizens in scenes never seen before uniting to grieve and assist the bereaved, injured and bury the dead.

Chimanimani in particular has been cut off from the rest of the country and treasury announced this week it had availed some RTGS$50 million for emergency reconstruction of roads, bridges, health centres, schools and related infrastructure.

Government is also appealing for psycho-social support for survivors of the cyclone with children who witnessed some of the most devastating effects of the cyclone.