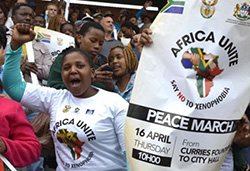 AS Mandela stated “After climbing a great hill, one only finds that there are many more hills to climb”, the current social anger at immigrants over unemployment is one of the main hills South Africa needs to climb. The huge social problems remain a threat for the country’s socio-political order and this is hindering South Africa from reaching its full economic potential.
The manner stakeholders (the youth, government and media) dealt with the issue was destructive and this puts the country in a difficult position internationally whilst damaging the moral high ground it so enjoyed. The destructive anger of South African youth is born out of ignorance of the country’s relationship with its fellow Africans.  To the majority of black and white South Africans living under apartheid, Africa was some faraway place that had little or nothing similar to or to do with South Africa.
The rage against African migrants is happening at a time South Africa needed to expand its intra-Africa trade as the European market slowed down. These migrants were creating indirect demand for South African products and services in their homeland.  For example, due to the Somali migrants in South Africa, there are many imported South African products and services in the Somali market. Regional trade is vital for South Africa as it acts as a cushion during the global crisis, especially if foreign investors instantly withdraw their investment from the country.  It is time for South Africans to collectively fix their roof while the sun shines, to compete in the coming more dangerous global environment.
Historically in pre-colonial times, Africa had open migration and it was part of normal life in many parts of the continent.  African historians consistently argued the fact that the geography of the continent was such that it facilitated mobility, contact and exchange. The key problem is that with few exceptions, the vast majority of South Africans are poorly informed about how their particular community relates to its continental counterparts especially in the context of the pre-colonial era and the early contact with Europeans.
This syndrome is also suffered by the majority of African countries as they learned more about the history of their colonisers than about the history of their own countries. West Africa knew more about Britain than East Africa and vice versa. In the French colonies, they knew more about France than about their own West African neighbours.Advertisement

Awareness of one’s history is important as it has been said that “he who controls the past controls the future”.  Even the doctor, to get an accurate picture of one’s state of health asks for his/her medical history.  One’s health is heavily influenced by the past (Your heredity, past behaviors, past experiences are all important determinants and clues to your present condition).  Historical awareness will allow the South African youth who are the country’s greatest asset to gain self-awareness or self-knowledge.
This is key to peoples’ development as once self-respect is gained a person is able to flourish in all aspects of his life (work, family, entrepreneurial etc). Therefore, there is an urgent need to kick-start a process that seeks to reconnect South Africans to other African communities.  Africa needs South Africa to succeed and for South Africa to succeed requires looking inwards for solution. The present and the future of Africa will be determined by the conception that African intelligence forms of the African past.
The Way Forward:
Re-examining the Country’s Educational System
There is growing realisation that an educational system designed for industrialisation is no longer relevant in today’s volatile world. Many countries are seeking redesign their educational systems into one that prepares the new generation for life and not for work only; psychologist may call it “Emotional Intelligence”.  The sad irony is that African ancestors have left us oratory resources (proverbs and poems) that equip us for lives which are more valuable than the mineral resources the continent has got.
But we learn about Shakespeare at school and few students stumble on African literature books while looking for books in the library campus. These students describe that moment as “once you have found your first diamond, you will never give up looking”.  Once you find African literature, you become addicted to it. The generations of Mandela were lucky to have such awareness of traditional knowledge and he demonstrated this in his leadership. His leadership drew inspiration, wisdom, courage, humility and patience from the traditions of Africa as well as the best of the Western leadership skills. He was able to traverse between the two worlds (African tradition and Western concepts).
De-bureaucratisation of the Informal Markets
One of the trends in many countries like South Africa is that despite heavy foreign direct investment, nothing has trickled down to the ordinary poor. The economy has boomed but nothing has boomed for the majority of individual poor young South Africans. But one area that has shown promising growth for the marginalized is the informal sector and such growth is badly hindered by government red tape and bureaucracy.
We witness punitive municipal regulations such as confiscation of goods with no warning and the imposition of fines for trading in specific areas causes precarious livelihoods to be instantly destroyed. This is what makes African youth rage against such injustice. The experience of those youth who work in the informal sector came under the media spotlight when Tunisian street vendor “Mohamed Bouazizi” set himself on fire. That fateful day sparked the Arab Spring protest.
The injustice of this sector starts from the name “Informal” as it sounds illegitimate. But the reality is that the informal sector especially the open markets has both financial and social benefits. Open markets have been found to contribute to the local economy through being a place of employment, trading revenues and bringing customers to adjacent shops. It creates community capital or social cohesion and the community formed by the marketers is many orders of magnitude superior to the experience in shopping malls where shopping has become ever more monochrome and impersonal.
As human beings, we are not good at knowing what is good for us and African ancestors warned us by stating “The nice fig is often full of worms”. To heal South Africa’s past; the country must nurture the informal sector and establish more open markets that connect districts and villages and provide an environment that allows them to flourish organically.
The need for mentoring one another
One of the experiences the early post-apartheid South Africa government has witnessed was mutual collaboration and interdependent working relationship between former political enemies. There was a lot of mentoring going on and this is what made the South African experience “A Forced Marriage That Works”.  But there is a growing need for such alliances and mentoring to be widely distributed throughout the private sector and in our daily life.
This involves mentoring someone who doesn’t come from the same background as you, whatever that background is. It is about opening doors for people who couldn’t even get to the hallway.  For example, those who succeeded in business giving some time to mentor youth start ups, inspire them and provide resources outside the mentee’s routine environment.
Finally, South Africa’s success is vital for Africa and is capable of being a rainbow in Africa’s cloud. The only way the future of Africa can be perfect for African people whose past was made imperfect by slavery, colonialism and present merely continuous (Neo-colonialism and mutual self destruction) is to reconsider and move beyond the greater crime of colonial legacy that “each of us either native or a settler”.
Africans need to find a new paradigm for historical understanding that emphasises our commonalities rather than our differences. Mandela understood that the Afrikaners considered themselves to be Africans every bit as much as the members of the ANC did.  As it has being said “When spiders unite, they can tie down a lion”. Africa of all races must unite to lid the light of the Dark Continent and give an Account of itself to the global world market.
Bazi Bussuri Sheikh can be reached at bazisomali@hotmail.co.uk