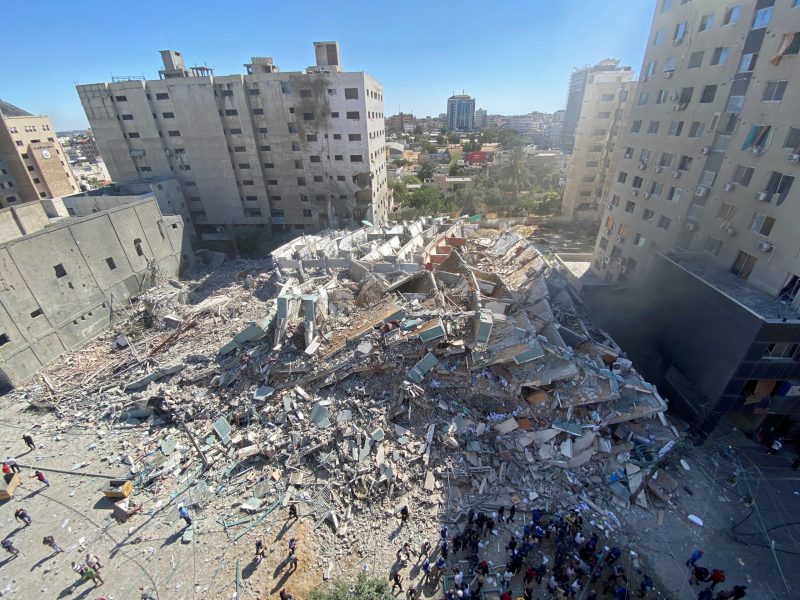 ADDRESSING the UN General Assembly in May this year, United Nations Secretary General António Guterres remarked: “If there is a hell on earth, it is the lives of children in Gaza today.”

The statement was made at the height of the air and artillery bombardment by the Israeli Defence Forces in Gaza were about 208 Palestinians, including 65 children were killed.

The 11-day onslaught on Gaza, another episode in the unending conflict between Israel and Palestine was described as one of the heaviest Israeli attacks on the Palestinian enclave ever.

Under international humanitarian law, non-combatant civilians like children are guaranteed humane treatment and covered by the legal provisions on the conduct of hostilities.

Given the vulnerability of children, the Geneva Conventions of 1949 and their Additional Protocols of 1977 lay down a series of rules according to them special protection.

The Additional Protocols, the 1989 Convention on the rights of the child, and its recent Optional Protocol also set limits on children’s participation in hostilities.

Unfortunately, these rights under international law are being disregarded, in the Israeli- Palestinian conflict leaving children to bear the full brunt of the conflict.

They have been victims of indoctrination, school closures, medical problems, and post-traumatic stress because of the conflict.

While both countries have been accused of violating international humanitarian law by recruiting child soldiers, Israel has been apportioned much of the blame.

Palestinian writer Anton Shammas notes that since the Six-Day War (5 to 10 June 1967), when the West Bank and the Gaza Strip fell under Israeli military occupation, the idea of ‘childhood’ was abolished and dropped from Israeli military declarations, so that if a 10-year-old happened to be shot, he was referred to as “a young man of ten.”

According to the 2004 Child Soldiers Global Report 2004 focusing on occupied Palestinian territories: “Israeli occupying forces allegedly used torture and other forms of coercion to recruit Palestinian children as informants.

“In the Occupied Palestinian Territories and in Israel, the Israeli forces detained Palestinian children under military provisions that failed to meet international standards for the treatment of prisoners and for juvenile justice.”

The Israeli intelligence services (Shabak) has for a long time been accused of seeking to recruit children as informants.

A field survey with former child detainees conducted by Defence for Children International-Palestine Section (DCI-PS), estimated that 60 percent of the children interviewed, some of them are as young as 12, were reported to have been tortured or subjected to other forms of coercion or inducement to make them cooperate.

UN Special Rapporteur and South African professor of international law John Dugard notes that in the early years of the Palestinian uprising against Israel between 2000 and 2002, children who were not participating in demonstrations were killed by tank shelling, artillery fire, and helicopter gunships.

Organisations like UNICEF, Amnesty International, B’Tselem, and individuals such as the British writer Derek Summerfield, have called upon Israel to protect children from violence in accordance with the Geneva conventions.

The European Union linked the 2004 suspension of Israel/Europe trade agreement talks to human rights issues, especially in regard to children.

Unfortunately, this has not deterred the country from violating children’s rights.

It is high time that international law develops teeth to bite aggressors against children’s rights.

Their rights should be seen to be respected and not only preached on political podiums.

Children in Palestine and Israel, like every other child, have an inherent right to education as provided for by the Universal Declaration of Human Rights.

They should not be targets of conflict and the Geneva Convention should be used to hold to account those violating its provisions.

The law of force, particularly jus in bello has two principles that should be religiously respected to save children in conflict areas which are discrimination and proportionality.

Discrimination deals with the legitimate targets in war while proportionality entails how much force is morally appropriate.

The reality of the matter is that the two principles are being violated but little if anything is being done to salvage the situation, especially the fate of Palestinian children.

In a 2016 Children and Armed Conflict Report developed by UN Special Representative of the Secretary-General for children and armed conflict Leila Zerrougui: “States must ensure their engagement in hostilities and responses to all threats to peace and security, including in efforts to counter violent extremism, are conducted in full compliance with international humanitarian, human rights and refugee law. It is unacceptable that failure to do so has resulted in numerous violations of children’s rights.”