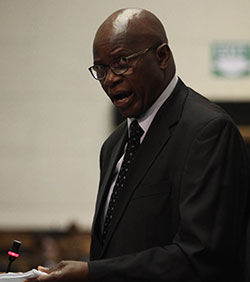 ZIMBABWE is set to receive a $25.5 million grant from the United Nation’s International Fund for Agricultural Development (IFAD) to support irrigation projects in the country, Finance Minister Patrick Chinamasa has said.
Zimbabwe has been a member of the 178-member fund since independence, receiving technical and financial assistance for several smallholder irrigation projects in the rural areas, but IFAD cut off support in 2006 because of non-payment of arrears.
The grant marks a resumption of relations after IFAD approved a proposal by Harare last December to reschedule a $23 million debt owed to the UN agency.
In a statement on Thursday, Chinamasa said the financing agreement would be signed at the IFAD headquarters in Rome on Friday after the IFAD executive board approved the grant in September.
“The project is targeting 4,000 hectares of smallholder irrigation schemes in communal and old resettlement areas in Manicaland, Masvingo, Matabeleland South and Midlands provinces,” said Chinamasa.
“The objective of the programme is to sustainably increase diversified production, productivity, income and improve resilience of households in the selected areas.”
Last week, government announced that it was negotiating with the Kuwait Fund for Arab Economic Development for funding amounting to $35.7 million to implement an intensive citrus irrigation project in Matebeleland South province, which is expected to benefit 5,000 households.Advertisement