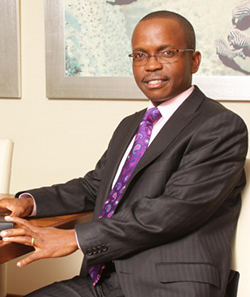 SHINGI Munyeza, who left his position as African Sun group chief executive last week, says he will remain active in the tourism industry with his family business.
Munyeza – whose family investment vehicle is the franchise holder of South African fast food chains Mugg & Bean and Ocean Basket – has been with African Sun for the past 13 years where he became chief executive in 2002 after leading a consortium of local businessmen to take over the group.
The group appointed Edwin Shangwa as the acting chief executive.
In 2013, Munyeza sold his 31,3 percent shareholding in AfriSun to Brainworks Capital in exchange for cash and 17.02 percent of Brainworks shares.
Brainworks, through its subsidiary, Lengrah Investments, increased its holdings in the hotel group to 44 percent, becoming its major shareholder, necessitating a mandatory offer to the minority shareholders.
Munyeza told The Source that he was only leaving African Sun not the tourism industry.
“I am not leaving the tourism industry but African Sun and it’s been sweet and sour. This has been my life for the past 13 years so it’s not easy to just let it go but a sour bite,” he said.
“The exciting part, which is the better part, is to leave it in capable hands to ensure that it’s a strong entity and it can do its best not only in Zimbabwe but in the whole African continent.”
Munyeza said he will be supporting African Sun though he would be running his businesses.
“I will remain a friend and a passionate supporter of African Sun and see it grow further though I will be having other responsibilities which may be requiring my attention.
“My experience with African Sun was great and I couldn’t have swapped it for anything – the good and bad times which were altered with maturity and betterment and I enjoyed myself.”
Bekithemba Nkomo also stepped down as a chairman for Herbert Nkala, a former chief executive of rival group, Rainbow Tourism Group (RTG) to take over.
Speaking after the group’s annual general meeting on Tuesday, Nkala said the group will give ‘significant’ attention to revenue growth and debt restructuring.
“The second phase of enhancing the balance sheet strength would be a series of transactions which will see further debt reduction to below $9 million.Advertisement

“The company’s management will work with its bankers to restructure the remaining debt to levels that will be sustainable given the company’s cash generating abilities,” said Nkala.