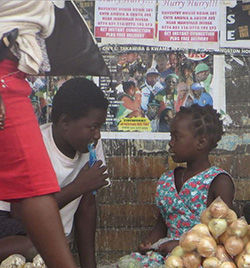 THE International Monetary Fund has lowered Zimbabwe’s Gross Domestic Product (GDP)’s projected growth to 2,8 percent this year and 2,7 next year on continued economic pressures.
In its regional economic outlook (sub-Saharan Africa) released on Tuesday, the international financial institutions categories Zimbabwe as one of fragile countries in the region, alongside Burundi, Central African Republic, Comoros DRC, Côte d’Ivoire, Eritrea, Guinea, Guinea-Bissau, Liberia, Madagascar, Malawi, São Tomé & Príncipe and  Togo.
The IMF said consumer prices in Zimbabwe are likely to end this year at -1 percent and maintain the trend next year, signalling entrenched deflation.
Government expenditure as a percentage of GDP is seen ending the year at 29.1 percent rising to 29.5 percent in 2016.
IMF said Government debt as a percentage to the GDP is also seen high at 55.2 percent by the end of the year, spiking to 54.7 percent next year.
Trade balance on goods is seen ending at -19.6 percent of GDP and is expected to go up to -20.8 percent in 2016
Last week, the IMF said the continued decline in global commodity prices, fiscal challenges, and possible difficulties in policy implementation would weaken economic growth.
Local investment firm, Invictus early this month painted a gloomier picture of the economy, saying it could contract by four percent – its bleakest post-dollarisation outlook – weighed down by weak mineral prices and poor foreign direct investment flows.
Zimbabwe owes close to $10 billion in external debt, half of it in arrears and the country has not received financial support from the IMF, World Bank and African Development Bank since 1999.
The economy is also slowing down due to lack of foreign investment, electricity shortages and expensive loans. Cheaper imports are damaging local industry, forcing firms to close.Advertisement